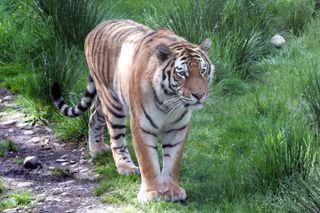 A rare breed of tigers in Russia has been spotted behaving bizarrely for more than a decade, and now researchers say they may know why.

The majestic, endangered felines have stumbled into villages and roads, emaciated and unafraid of people. Eventually, most of the tigers died, or had to be killed.

The virus, which normally infects domestic dogs, may be responsible for the deaths of at least 1 percent of Amur tigers since 2009, the researchers said. [Gallery: Rare and Beautiful Amur Leopards]

"Losing 1 percent of an endangered population is pretty significant," study researcher Denise McAloose, a pathologist at the Wildlife Conservation Society in the Bronx, New York, said in a statement.

McAloose and her colleagues examined tissue samples from five wild Amur tigers that died or were killed as a result of a neurological disease. Canine distemper virus was responsible for the deaths of two of the big cats, and caused a severe infection in a third, the team reportedin the journal mBio.

The brains of the two tigers were full of lesions, suggesting they suffered from severe viral encephalitis, which explains the animals' strange stumbling behavior. Molecular analysis of proteins and antibodies confirmed the presence of the virus, and a gene associated with the virus was found in the third tiger.

The afflicted tigers were found across the Russian Far East, throughout the range where Amur tigers live. The virus appears to be a recent threat, because blood taken from tigers before the year 2000 tested negative for viral antibodies, McAloose said.

The researchers said they suspect the tigers might have contracted the virus from unvaccinated domestic dogs in Russia, or possibly from raccoon dogs or foxes.

To determine the source of the tiger infections, McAloose and her team are now collecting samples from dogs and small wild carnivores in the region.

McAloose called the situation for Amur tigers "quite serious."

Once found throughout the Russian Far East, northern China and the Korean peninsula, the animals were nearly driven to extinction by hunting. By the 1940s, just 40 tigers were living, according to the World Wildlife Fund. Thanks to conservation efforts, the population has increased to around 450 today.