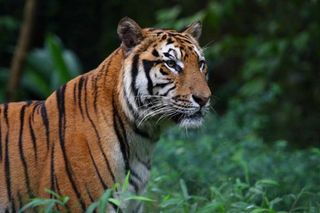 Tiger populations around the world are under siege from habitat destruction and poaching, but a deadly new threat now has conservationists worried: canine distemper virus, or CDV.

The easily spread disease was once confined to dogs, but in recent decades, the virus has mutated to a form that can infect other mammals, such as seals, raccoons, hyenas and big cats, John Lewis, director of Wildlife Vets International, told the BBC.

"If you wind the clock back about 30 or 40 years, it … only affected dogs," Lewis said. "But in the intervening years, the virus has evolved." [Iconic Cats: All 9 Subspecies of Tigers]

The first reports of a CDV infection jumping to another species came from Africa. "In the mid-1990s, in the Serengeti, Africa, about 30 percent of the lions died from CDV, which came from dogs in surrounding villages," Lewis said.

The disease affects the central nervous system and can cause infected animals to behave oddly. "Since 2000, in the Russian Far East, there have been a few cats reported as behaving strangely and coming into villages, apparently not showing much fear towards people," Lewis said.

CDV can be spread through the air as aerosol particles, according to the Baker Institute for Animal Health at Cornell University. Among adult dogs, the disease kills an estimated 50 percent of infected animals.

Treatment for CDV is difficult, and even surviving animals may suffer long-term complications. A vaccine is available and is considered critical: "Vaccination … should not be considered an option — it is a must," according to the Baker Institute.

Over the last century, tiger populations have declined by about 95 percent, and tigers now survive in only 40 percent of the habitat they occupied just a decade ago, according to the World Wildlife Fund (WWF). By some estimates, roughly 3,200 tigers are thought to remain in the wild.

Experts are particularly concerned about the survival of the critically endangered Sumatran tiger (Panthera sumatrae) — only about 500 of the big cats are believed to remain on the Indonesian island of Sumatra, according to a statement by the Sacramento Zoo.

CDV infections have also been found in Amur tigers (Panthera tigris altaica or Siberian tigers). Fewer than 400 of the endangered big cats are thought to remain alive, according to the International Union for Conservation of Nature.

Lewis and a team of Indonesian vets are developing a plan to monitor for the presence of CDV in the Sumatran tigers. It's possible that some of the tigers will develop an effective immune response to the disease, but most infected animals will likely die from it.