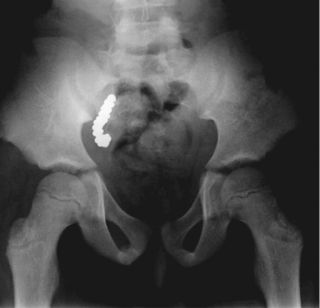 An x-ray image showing objects inside the abdomen.
(Image: © The New England Journal of Medicine ©2013.)

An 8-year-old boy in Australia had high levels of lead, a toxic metal, in his blood for more than two years for unexplained reasons, until doctors found lead pellets in his body, trapped in an unlikely place, according to a new report of his case.

Doctors had tested the boy for toxins in looking for the cause of his unusually hyperactive behavior. They found levels of lead in his blood ranging from 17.4 to 27.4 microgram per deciliter, much higher than the level of 5 micrograms considered normal. But the source remained mysterious -- doctors couldn't find what the boy might have been touching, inhaling or eating, to have such high lead levels for months.

When the boy started to have a stomachache and was admitted to the hospital, the doctors did an x-ray, which revealed large numbers of small round objects in the boy's abdomen, according to the researchers, who published a case report in Aug. 8 issue of the New England Journal of Medicine. [9 Weird Ways Kids Can Get Hurt ]

The metallic-looking objects were in the lower right side of the boy’s abdomen, appearing to be inside the digestive tract. The doctors immediately gave the boy a bowel washout, which should have cleared any object within his digestive tract, but a second x-ray showed the objects had not moved.

The doctors suspected the unlikely scenario – the objects had to be in the boy's appendix.

In surgery, the doctors removed the boy’s appendix and cut it open, revealing 57 lead pellets trapped inside. "It's one of those things you only see once in a life time," Dr. Ibrahim Zardawi, the pathologist who examined the appendix, told LiveScience. "I've been in medicine for almost 40 years now, and had never seen anything like this."

The boy’s appendix weighed 5 times heavier than normal when containing the pellets, but other than few tissue scars, it was normal and wasn’t inflamed. [See the image of the appendix with the pellets inside ]

It is highly unlikely for external objects to end up in the appendix, Zardawi said. Sometimes small fruit seeds such as tomato seeds may find a way through, but it’s a puzzle as to how so many pellets entered and became stuck in the boy's appendix, he said. The pellets likely came from the geese the boy’s family regularly hunted and ate, they later told the doctors. The boy and his siblings said they had been eating the pellets as part of a game they played, to make the pellets disappear.

Lead is a heavy metal used in manufacturing batteries and plastics. It is strongly poisonous to humans when ingested or inhaled. Once in the body, lead circulates in the blood and small amounts can be excreted through urine or feces, but some can remain in the tissues, organs and bones. Symptoms of severe lead poisoning include confusion, seizures, coma and death.

"One important question to ask is, why not use copper pellets?" Zardawi said. The pellets used to kill the birds usually stay inside the animal, and the lead can be dangerous to other animals and to whoever eats the meat. The whole family had high levels of lead, he said.

Consuming just one lead pellet could have been enough to make the child seriously ill, Zardawi said.

In another case of lead poisoning from a mysterious source, a 4-year-old boy was brought to a hospital in Knoxville, Tenn., with symptoms of lead poisoning. As detailed in the report of his case, published in 1994 in the Journal Pediatric Surgery, it took the doctors several rounds of x-rays and bowel washouts to finally find a lead pellet trapped in his appendix.