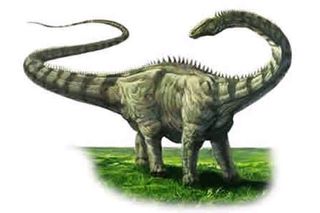 For the study, published Wednesday (Aug. 14) in the journal PLOS ONE, researchers analyzed the movements of ostrich necks in order to gain insight into how long-necked dinosaurs may have moved.

The results suggest the long-necked beasts probably didn't swivel their heads around, or move their necks from ground to treetop, as scientists had previously proposed.

Ever since sauropods, or long-necked dinosaurs such as Diplodocus and Apatosaurus were first discovered, people debated why these majestic beasts had such long necks. The massive creatures — the biggest ever to walk the Earth — had absurdly long necks that could grow up to 50 feet (15 meters) long. Some scientists believed the vegetarian dinosaurs nibbled plants that grew on the ground, whereas others thought the beasts grazed on trees. [Image Gallery: 25 Amazing Ancient Beasts]

Past researchers had come up with computer models based just on these dinosaurs' vertebrae and concluded that the giant dinosaurs had fairly flexible necks, said study co-author Matthew Cobley, a paleontologist at the University of Utah. That would have allowed the dinosaurs to swivel their necks to eat everything in sight before having to move their bodies — an energy-saving measure for such massive beasts.

But Cobley and his colleagues weren't convinced.

The team looked at the most similar living animal with an extremely long neck: the ostrich. They analyzed the cartilage and soft tissue in the ostrich necks and found that these tissues reduced the overall flexibility of the neck.

"Imagine two bones next to each other moving. If you put anything in between them, like a muscle or something, then it's going to reduce the motion between those two bones," Cobley said. (Past models hadn't accounted for any tissue between the neck vertebrae.)

The findings suggest that sauropods probably didn't swivel their heads around to nibble every branch bare or move their heads from treetop to the ground. Rather, they probably had to move their large, lumbering bodies a fair amount to access the 880 lbs. (400 kilograms) of food they ate daily.

The new study, "is a huge step forward, and it's going to inspire more work in the future," said Matthew Wedel, a paleontologist at the Western University of Health Sciences in Pomona, Calif., who was not involved in the study.

But the ostrich may not be a perfect analogy to the long-necked beasts: Ostriches walk on two legs, whereas sauropods walk on four, Wedel added. Ostriches' heads bobble a bit as they walk, but that may not be the case for the dinosaurs.

"Somebody probably needs to go do the same thing with a giraffe," which is four-legged, Wedel told LiveScience.