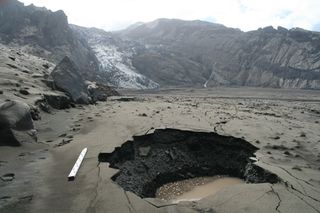 In the foreground of this view looking towards Gigjokull from what used to be the proglacial lake is a kettle hole. Dunning explains the phenomenon: "An ice block brought down during the flood has melted out leaving a hollow. Inside the walls of the hole you can see the alternating layers of fine and coarser flood sediments from one of the later, small outburst events."
(Image: © Copyright All rights reserved by Stuart Dunning Northumbria.)

The volcanic eruptions in Iceland that disrupted travel in 2010 generated floods that now reveal a paradox: Small deluges of water after eruptions may actually change the volcanic island's landscape more than larger ones do, researchers say. And these findings could also apply to the ruddy landscape of Mars.

The volcano Eyjafjallajökull (AYA-feeyapla-yurkul) exploded to life three years ago after nearly two centuries of dormancy, spewing out a huge plume of ash that forced widespread flight cancellations for days. The volcano's many eruptions over 10 weeks melted parts of the volcano's icecap, generating more than 140 of the floods known as jökulhlaups.

In the course of recorded history, more than 40 volcanic eruptions have generated dangerous jökulhlaups, resulting in more than 37,000 deaths globally. Scientists have suggested global warming could lead to even more jökulhlaups by shrinking glaciers that would otherwise suppress volcanoes underneath the ice. However, until now, there was little data on how precisely jökulhlaups reshaped landscapes, and thus what exact risks these floods might pose. [50 Amazing Volcano Facts]

Intense seismic waves and deformations in Earth's crust within and around Eyjafjallajökull in the months preceding its most recent eruptions revealed that an outburst was imminent. This gave researcher Stuart Dunning, of Northumbria University in Newcastle upon Tyne in England, and his colleagues a chance to survey where floods might flow after the eruptions to shed light on how these events alter landscapes.

Laser scans and time-lapse camera imagery generated detailed 3D models of the area surrounding Eyjafjallajökull before and after eruptions. The 20 laser scans each gathered more than 30 million 3D data points.

That description of data collection might not do justice to the experience of measuring a volcano's effects, the scientists said. "Fieldwork is always a challenge, but standing beneath a volcano in what you believe is the routeway of an outburst flood adds a little excitement to the proceedings," Dunning told LiveScience's OurAmazingPlanet. "Before the eruption, I remember surveying the area around Gígjökull glacial lake, which would later be completely in-filled by flood sediment, and feeling the equipment box I was sitting on being lifted off the ground, and then watching a wave move through the frozen lake around us. It was an earthquake, reminding us that the volcano was definitely building up to something." [In Photos: Aftermath of Iceland Volcano Floods ]

The largest jökulhlaup from Eyjafjallajökull spewed more than 60 percent of the water released by all the floods from the eruptions on April 14, 2010. Surprisingly, however, it only deposited 18 percent of the sediment that ended up in front of the Gígjökull glacier.

After the eruption, when Dunning and his colleagues surveyed the lake the floods had completely filled with sediment, "we had assumed that all we could see would be as a result of the two largest floods," he said. "It was surprising to then come to the conclusion that a series of far smaller floods had created almost all of the landscape we could see."

These findings contradict prior models that assumed that the largest floods dominated the landscape after eruptions. Rather, most changes resulted from relatively small jökulhlaups.

"The cumulative effect of many small events, so small that they may barely register downstream, can alter large areas, through both deposition of new sediments and by eroding those of the larger flood events," Dunning said. "This is important for both how landscapes evolve over long time scales and for how we make our assessments of hazard and risk."

If Dunning and his colleagues ever get another chance to investigate a series of jökulhlaups, they would like to use flying robots to do so.

"I work with small unmanned aerial vehicles [UAVs]" Dunning said. "Next time, I would want to keep a UAV in the air carrying out repeat surveys during a set of glacial outburst floods. From this, we can generate high-resolution 3D models and take our calculations of in-event changes to another level."

And the findings don't just apply to the terrestrial landscape. "What we have been studying is a great analogue for events on Mars," Dunning added. "There is a debate on the role catastrophic floods or a longer-term series of flows have there to build very similar-looking deposits."

Dunning and his colleagues detailed their findings online July 30 in the journal Geology.