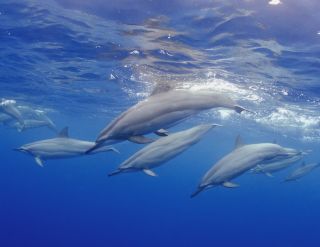 Dolphins frolic off the Kona coast of Hawaii in the second-place wide-angle image in the 2013 underwater photography contest.
(Image: © Joseph Tepper, New York)

After a 20-year separation, dolphins in the study recognized the identifying whistles of other animals that were once housed with them, according to a new study published today (Aug. 6) in the journal Proceedings of the Royal Society B.

The findings imply that long-term memory might be much more widespread than thought in the animal kingdom, at least among socially complex species, said study co-author Jason Bruck, an animal behavior scientist at the University of Chicago.

Until recently, scientists believed that very few, if any animals other than humans had long-term memories. A few studies have suggested that monkeys have memories that last at least four years, and anecdotal reports suggest elephants may remember their kin for up to 10 years.

In captivity, dolphins reunited with long-lost buddies seem to pick up where they left off. But scientists wondered whether dolphins actually remember each other, or whether something else motivated this behavior. [Deep Divers: A Gallery of Dolphins]

But there's a scientific way to test dolphin memory: Each dolphin develops an individual whistle, and these whistles serve as dolphin names that close friends can learn. And unlike appearance, which changes as dolphins age, the signature whistle remains constant over a dolphin's lifespan.

To see how long dolphin memory lasts, Bruck and his colleagues spent five years collecting recordings of the whistles of bottlenose dolphins at six institutions: Brookfield Zoo near Chicago, the Indianapolis Zoo, the Minnesota Zoo, Dolphin Quest: Bermuda, the Texas State Aquarium and The Seas at Walt Disney World in Florida.

The dolphins were frequently traded between sites, and the institutions keep meticulous records, so Bruck's team was able to recreate a social network for the dolphins.

The researchers then went to each of these locales and played about 1,200 recordings of signature whistles to 43 dolphins. Some of the whistles were from stranger dolphins, while others were from dolphins they had once known, but now lived elsewhere.

Dolphins ignored whistles from unknown animals. But they stopped, came up to the speakers and even occasionally called back when they heard the whistles of their old acquaintances.

The findings suggest the dolphins remembered their chums for decades, the researchers said. One dolphin hadn't seen another for 20 years, yet still recognized his long-lost acquaintance's call.

Dolphins might have even longer memories, but that was the longest separation in the study, Bruck said.

"I was just blown away," Bruck told LiveScience.

But dolphins may not be the only animals with such long-term memory, said Janet Mann, a biologist at Georgetown University in Washington, D.C., who was not involved in the study.

Parrots, whales, elephants, great apes and other species where animals leave or return to a social group over long-periods may also have long-term memory, Mann told LiveScience.

The new study also suggests the cognitive requirements of social networks led to the evolution of higher cognition in many animal species, Bruck said.

Most scientists now believe that animals such as humans and primates evolved higher thinking abilities in order to better trick and manipulate one another, but dolphins don't regularly use deceit, Bruck added.

"So we need another explanation for where the complex cognitions in these animals comes from," Bruck said.