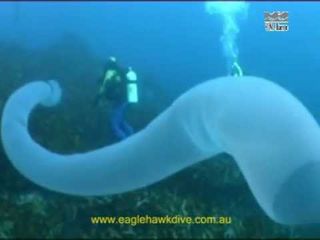 Pyrosomes are actually clonal colonies made up of many thousands of small, individual pyrosomes.
(Image: © YouTube screen grab from EagleHawkDive.com.au.)

Marine biologists sometimes refer to pyrosomes as the unicorns of the sea — creatures so mysterious and elusive that they're almost mythical.

Pyrosomes are actually not individual creatures, but colonies made up of thousands of individual pyrosome clones. These clonal colonies can be as small as a pencil eraser, but larger colonies may grow up to 60 feet (18 meters) in length.

Like many large sea creatures (such as whale sharks), pyrosomes are filter feeders that take in seawater containing the plankton on which they feed. After they've consumed the plankton, they push out the filtered water.

Pyrosome colonies are shaped like long bells, open at one end. The open end, through which the colony expels its filtered water, can be as large as 6 feet (1.8 m) in diameter — large enough for a human to fit inside it. Though pyrosomes drift through the water on ocean currents, they can also move using a slow-motion form of "jet propulsion" by expelling water out of their open end.

"Because each member noshes on tiny plankton, they must constantly suck water in and over their [feeding] baskets, and constantly blow waste out the hollow center," explains R.R. Helm in Deep Sea News. "Thus, they are moving at a steady, albeit painfully slow, speed."

What's even more intriguing about pyrosomes is that they are "intensely bioluminescent," Helm wrote. The colonies will respond to other sources of light and to touch by emitting a bright, bluish-green light. The word pyrosome, in fact, comes from the Greek "pyro," meaning "fire."

Pyrosomes are usually found only in the open oceans and can live at extreme depths, which may explain why they aren't often seen. On calm nights far from land, sailors have reported seeing dozens of pyrosomes glowing eerily beneath the surface of the water.