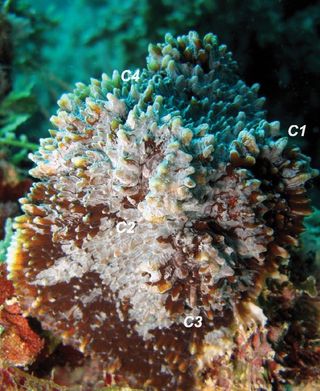 The knob-shaped holotype of Echinophyllia tarae. This image shows the coral colony in situ before it was collected.
(Image: © Francesca Benzoni, ZooKeys)

In the remote Gambier Islands in French Polynesia, researchers have found a striking species of reef-building coral that was previously unknown to science.

The new species, dubbed Echinophyllia tarae, is a type of stony coral or Scleractinia. These marine animals are quite ancient and they form hard skeletons that make up much of the scaffolding of today's coral reefs.

Echinophyllia tarae was discovered in 2011 during an expedition mostly aimed at studying plankton by the French research organization Tara Oceans. The species is named after the vessel, Tara, used in the voyage, but the researchers note that in the local Polynesian language, "Tara" can also refer to a the name of a sea goddess or a spiny, pointed object. [See Images of the Stunning New Coral Species]

The brightly colored Tara corals have large polyps and seem to be widespread in shallow lagoons around the Gambier Islands, but researchers are not sure if they can be found elsewhere. The species lives in protected reef habitats typically between 16 and 65 feet (5 and 20 meters) below the surface. The research team says it observed many instances where it looked like part of the coral had died but later experienced regrowth. They attributed this pattern to possible competition with other marine species like the soft-bodied corallimorpharians or zoanthids.

Coral reefs play a vital role in ocean ecosystems. Corals host colorful algae within their tissues. The algae, in turn, provide food not only for the corals but also other communities of sea creatures like crustaceans, fish and mollusks that thrive around reefs.

But these symbiotic relationships can be disrupted when disease, temperature extremes and pollution cause corals to kick out their algae guests. Stony corals in particular are under threat by the effects of global warming and ocean acidification, the researchers say.

"Although corals represent a relatively well studied group of charismatic marine invertebrates, much has still to be understood of their biology, evolution, diversity, and biogeography," the Tara Oceans researchers said in a statement.

"The discovery of this new species in French Polynesia confirms that our knowledge of hard coral diversity is still incomplete and that the exploration efforts of recent scientific expeditions like Tara Oceans can lead to new insights in a remote and previously poorly studied locations."

The species was described in the journal ZooKeys.