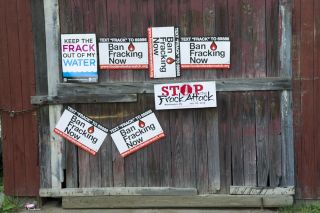 Signs protest fracking on the side of a barn in Pennsylvania.
(Image: © Melanie Blanding)

Kate Sinding is a senior attorney in NRDC's New York Urban Program. This article was adapted from a post to the NRDC blog Switchboard. Sinding contributed this article to LiveScience's Expert Voices: Op-Ed & Insights.

Recently, NRDC learned that regional staff at the U.S. Environmental Protection Agency (EPA) produced an internal presentation indicating methane was released during natural gas drilling and "fracking" operations in Dimock, Pa. — resulting in "significant" and possibly long-term damage to the water quality of a drinking-water source for 19 families.

That finding emerged in a ground-breaking story by Neela Banerjee on July 27 in the Los Angeles Times, which reported that internal EPA documents detailing local methane contamination were presented to the highest levels of regional agency staff in the spring of 2012. Yet EPA closed its investigation of contaminated drinking water supplies in Dimock just a few months later, declaring that it was no longer necessary for residents to be provided with alternative, safe, drinking-water supplies. As a result of that conclusion, mainstream press have widely reported that EPA has found the water in Dimock "safe" to drink.

What's more troubling is that the internal EPA report suggests the agency effectively declared Dimock residents' drinking-water safe despite concerns among EPA consultants and staff that the aquifer had been contaminated by high levels of methane from the Marcellus Shale, resulting in "significant damage to the water quality."

So, why would EPA decide to terminate its fracking investigation in Dimock without making public any analysis of the supporting data, while keeping internal dissenting views a secret? And why — a year later — hasn't EPA investigated those views further to determine the true level of risk?

Unfortunately, what appears to have happened in Dimock is just the latest in a larger, troubling trend in which EPA has failed to act on science studies from controversial fracking cases across the country. Instead, the agency appears to be systematically pulling back from its high-profile fracking investigations.

First, in March 2012 — without explanation — EPA abruptly withdrew an emergency order it had issued two years earlier against Range Resources Corporation after the agency found nearby natural-gas production operations from the company had likely caused methane and toxic-chemical contamination in Parker County, Texas drinking water supplies. The order had required Range Resources to provide families with alternative water supplies, install explosivity meters in homes, and remediate the aquifer. But, NRDC has no evidence the company ever fully completed these or other requirements of the order. Still, EPA withdrew the emergency order. In fact, reports indicate the water in Parker County remains contaminated and a health threat, and the EPA Inspector General is investigating the matter. Additionally, on January 16, Ramit Plushnick-Masti of the Associated Press (AP) reportedthat a leaked, confidential report proved EPA had scientific evidence against Range Resources, but changed course after the company threatened not to cooperate with the agency's ongoing national study of fracking. AP also reported that interviews with the company confirmed this. When asked to explain its actions, EPA's silence has been deafening.

Then, in late June 2013, EPA made an equally abrupt and unexplained announcement that it was abandoning an investigation into a high-profile drinking-water contamination case in Pavillion, Wyoming. That report generated fierce pushback from the oil and gas industry. Even though the U.S. Geological Survey released its own data in 2012 that backed up EPA's findings, without any meaningful explanation, the agency abruptly announced that it would not finalize its report and instead would leave matters in the hands of Wyoming regulators.

EPA's recent spate of gas-drilling investigation pullbacks calls into serious question the agency's commitment to conducting an impartial, comprehensive assessment of the risks fracking presents to drinking water — a first-of-its-kind study that is now in its fourth year, with initial results now promised in 2014 (the EPA recently announced that it had delayed the expected final date of this study by two years).

EPA has said that there is no connection between dropping its investigations in Dimock, Pavillion and Parker County, and that it remains committed to the national study. But if EPA is really committed to understanding fracking risks to drinking water, then it doesn't make sense that the agency would drop the investigations in three cases where they have been collecting substantial data. By abandoning those inquiries and leaving them in the hands of state regulators — who in each case have shown they are not up to the task — EPA is walking away from important scientific information and analysis.

The federal government has a responsibility to protect citizens in communities that are suffering consequences from fracking, and to give them the full facts. It owes the American people a full and fair investigation of every case that can help to answer some of the vexing scientific questions as to whether — and if so, how — fracking and related activities contaminate drinking water.

Sadly, EPA's recent pattern of activity suggests neither has been happening. The EPA needs to level with the American people and assure us that we can trust the agency to keep our water safe.

This article was adapted from the post Why Would EPA Hide Info on Fracking & Water Contamination in Dimock? on the NRDC blog Switchboard. The views expressed are those of the author and do not necessarily reflect the views of the publisher. This article was originally published on LiveScience.com.