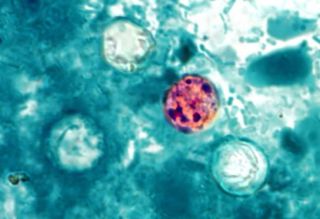 An outbreak of the intestinal illness cyclosporiasis has sickened more than 200 people in four states, according to the Centers for Disease Control and Prevention.

Most of the illnesses — which have been reported in Iowa, Nebraska, Texas and Wisconsin — began in mid-June through early July. At least eight people have been hospitalized, the CDC said.

So far, the CDC has not identified a particular food or drink responsible for the outbreak, but previous outbreaks have been linked to various types of fresh produce, the CDC said. It's not clear if the reported cases are due to a single source, or if more than one source of the parasites may be involved.

Cyclosporiasis is caused by the parasite Cyclospora cayetanensis. Symptoms include watery diarrhea, weight loss, cramping, nausea and fatigue. The infection is usually not life-threatening, the CDC says.

The disease is caused by consuming food or water that's contaminated with the parasite.

The CDC said it will continue to investigate possible cases and causes of the outbreak.