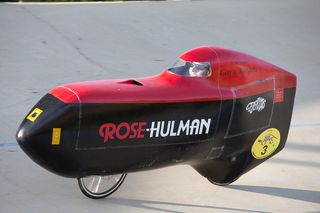 Each year, at locations around the globe, teams of mechanical-engineering students gather to demonstrate and race vehicles they have designed. The vehicles negotiate tight turns, slaloms, rough pavement and grocery stops. Peak speeds are often around 45 mph (72 km/h). The men and women designing and competing bring new ideas and innovations each year. And here’s the really interesting part: None of the vehicles uses a drop of gasoline. They don’t use batteries that are charged via the electric grid. They are nonpolluting, use zero fossil fuel and generate no greenhouse gases. So, what’s the power source  — Human muscles.

These vehicles are powered by the students’ legs and, sometimes, arms. The vehicles demonstrate remarkable engineering design and vehicle performance. The event is the Human-Powered Vehicle Challenge (HPVC), which has been held annually for each of the last 30 years in the United States and has expanded to Latin America and Pakistan. India will be added later this year. The American Society of Mechanical Engineers (ASME) organizes and manages the competition.

There are many other collegiate engineering competitions, quite a few of which involve vehicles of one type or another. There are races for off-road vehicles, Formula 1 race cars and snowmobiles. There is a competition for high-mileage vehicles, which look a lot like human-powered vehicles but run on gasoline and get about 1,300 miles (2,100 kilometers) per gallon.

Yet, the ASME HPVC stands out among all of these competitions, in part because of the structure of the competition itself, which gives student teams much more design freedom to innovate and engineer creative solutions. It also stands out because it encourages women — a group significantly underrepresented in mechanical engineering — to participate and, more broadly, to enter STEM professions. And, it stands out because of the social and environmental ramifications of human-powered vehicles, which offer very tangible benefits to people in both developed and undeveloped nations.

The HPVC began in 1983 at the University of California, Davis. At that time, it was all about speed — how fast a human could go over level ground by his or her on power — and some remarkable speeds were obtained. By 2002, the competition had grown so much that two competitions were held — an east event and a west event. At about the same time, society was recognizing the value of human-powered vehicles as sustainable transportation, and the competition added a second class of vehicles for utilitarian uses.

For the first few years, teams entering that class struggled to develop viable technologies that would lead to high-performance, practical vehicles. By 2011, the utility vehicles had improved to the point that the vehicle classes were combined. Today, successful HPVC teams must design and build vehicles that are both fast and practical for daily transportation. They compete in four events — an engineering design event, a speed event, an innovation event and an endurance event — that demonstrate all aspects of the design.

All real engineering projects involve constraints. Good engineering combines innovative thinking and compromise — all within a framework of budgetary, regulatory, physical and manufacturing constraints — that lead to improved products and performance. It is a balancing act that is difficult to learn in the confines of the classroom. This is where engineering design competitions really shine, because a team of students developing a competitive vehicle must learn those skills in order to even get to the competition.

The HPVC outshines other competitions because the rules are written so as to give teams as much design freedom as possible. For example, safety requirements are stated as performance requirements, rather than specifications for particular materials or geometry. Teams must address aerodynamics to score well in the design event, but may use whatever type or types of aerodynamic devices that work best in the races. They also can change configurations between races or even during a race.

This opens the door to true creativity and innovation — skills that are more important today than ever before. Moreover, students learn to work together as a team, to develop realistic budgets and to manage large and complex projects. In short, students learn the skills to excel in their chosen field of engineering.

Women are underrepresented in engineering, especially in mechanical engineering. This is a shame, as women engineers bring measurable benefits to design teams. Teams with women are more innovative and competitive, and result in greater business success. The HPVC has a long tradition of encouraging and supporting female engineering students. The speed event is actually two events — one for men and one for women. Teams must have both men and women to compete in both events. Likewise, both men and women ride in the endurance event. Teams racing without both genders must start 15 minutes later than everyone else.

These practices teach men and women to work together on a challenging project — important skills for early-career engineers. Hopefully, they also foster a sense of appreciation for what each gender brings to the engineering profession.

The vehicles that students design and race are variations on the familiar bicycle. Most are recumbent, with riders sitting down in a more aerodynamic position than they would on standard bicycles. Most also have aerodynamic fairings to increase speed. Some have three, or even four, wheels. Some are highly sophisticated, with lighting systems, anti-skid brakes and regenerative braking. All are powered by human muscle power alone, and produce no greenhouse-gas emissions or toxins. The goal is to design and develop efficient, sustainable and practical human-powered vehicles.

In developed countries, those types of vehicles, along with more conventional bicycles, can be used to relieve traffic congestion, improve public health, reduce air pollution and significantly lower transportation costs. In developing countries, human-powered vehicles can provide affordable basic transportation for personal transport, deliveries and even ambulance services. The HPVC mission encourages engineering students to consider the social, environmental and economic benefits of the vehicles they design. The result is vehicles that are affordable, clean and safe. They are faster and more comfortable than standard bicycles, and many offer protection from foul weather.

Some, particularly within the United States, have questioned the benefits of human-powered vehicles. The individual cost advantages are clear and significant. Consider a new college graduate who purchases a human-powered vehicle rather than an automobile. On average, he or she will save $5,000 to $6,000 each year — money that can go a long way toward repaying student loans or saving for a new house.

In addition, more than 9,000 lbs. (4,100 kilograms) of greenhouse-gas emissions would be avoided. If 5 percent of the U.S. population were to switch from automobiles to human-powered vehicles for most of their trips, the aggregate difference would be a reduction of 31 million tons (28 million metric tons) of greenhouse gases, and a savings of more than 3 billion gallons (11 billion liters) of gasoline. It is true that this represents a small fraction of total U.S. greenhouse-gas emissions, but it is a significant tonnage nonetheless.

Studies have shown that people who commute by bicycle live longer and have improved cardiovascular health compared to automobile commuters. Additionally, in many parts of the world, human-powered vehicles are used to meet basic transportation needs. A lack of infrastructure and prohibitive cost often make the automobile a nonviable choice, and transit systems may not exist.

Students participating in the HPVC are designing transportation solutions for a world faced with economic stress and poverty, climate change and strife over energy supplies. They learn to solve problems — technical, managerial, budgetary and logistic — in a structured and rational way. They learn to work together as a team to accomplish a challenging goal. Women and men work together, learning to respect each other’s contributions and talents. And they have fun along the way.

Of course, this is a bit idealized — some students are just there for the racing. Some teams don’t really work well together, and some doubt the potential for human good. Nonetheless, the participants in the ASME Human-Powered Vehicle Challenge are better for it. They are better engineers. They are better able to help advise, guide and lead the next generation. They are aware of the benefits — and the harm — that can be brought about by technological choices. They are the students employers want to hire. They are the ones that will lead us to a better future.