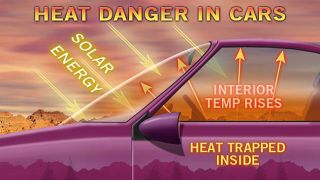 As a heat wave ripples across the country, hitting the I-95 corridor this week, temperatures will continue to soar. Accompanying the intense heat is an impending danger, as 20 children have died of heat stroke from being left in cars so far this year in the United States.

"This is still 33 too many," Null said. Despite being four less than the yearly average of 37 children heatstroke deaths, according to Null's research, typically, 52 percent of these deaths are due to a caregiver forgetting a child in a car, and thus many could be prevented.

The heating dynamics of cars are much different than those of other forms of transportation. The windows of a car act as a catalysts for rapid temperature increases inside the vehicle.

Other parts of a car also aid in increasing the car's interior temperature, including the steering wheel and the dashboard. Due to their dark colors, steering wheels and dashboards can hit temperatures up to 200 degrees when sitting stationary in the sun. They then radiate their own heat and further heighten a car's temperature.

"When a child is left in a car, there is a 50/50 percent chance that they will be left on the sunny side of the car," Null said. This is especially dangerous because children, unlike adults, have not yet developed the ability to cool themselves off.

Heat stroke, by clinical definition, occurs when the body reaches 104 degrees F. At 104, the body enters survival mode and stops perspiring. Only three degrees higher, at 107 degrees F, the body's cells start to die. This causes the internal organs to begin failing and death can occur soon after. These life-threatening temperatures can be reached quickly when one is stuck inside a car in the heat.

"In the worst case scenario, if a child is small and on the sunny side of the car, death can occur in 15 minutes or under," Null said.

Pets, like children, have a lesser ability to cool themselves off compared to adult humans. Each year thousands of animals perish as a result of heat stroke when left in a vehicle. However, pets are better protected than children by today's legal system.

Before exiting your vehicle, be sure to double check your backseat for some precious cargo you may be leaving behind. To help keep children safe, see the tips below from Null.

How to help keep children safe:

1. If you see a child unattended in a vehicle, immediately call 911.

2. Never leave a child unattended in a vehicle.

3. If you are missing a child, first check the pool and your vehicle.

4. Give yourself a visual reminder that your child is the backseat. Put the child's teddy bear on the front seat, put your cell phone, purse or briefcase in the backseat; that way you are forced to remember.