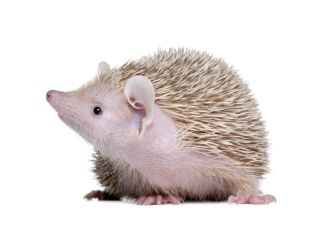 An unusual mammal in Madagascar has gobs of a special type of fat called brown fat packed around its sex organs, according to a new study.

Brown fat produces heat, but unlike other mammals, these beasts, known as lesser hedgehog tenrecs, can't maintain a warm body temperature all the time. The researchers say their finding yields new evidence for how the ability to regulate body temperature evolved in mammals.

"The tenrec maintains a high body temperature only during reproduction," said study researcher Martin Jastroch, of the Institute for Diabetes and Obesity in Germany. The distribution of brown fat around the reproductive organs suggests "ancient brown fat is there to incubate the reproductive cells," increasing the animal's chances of producing offspring, Jastroch said.

Most mammals shiver to produce body heat, but some can also generate heat in their brown fat. Unlike white fat, which stores energy the body can't use right away, brown fat contains lots of mitochondria, the powerhouses of cells, which dissipate energy in the form of heat.

"A lot of hibernating animals use brown fat to prevent from freezing, or to [provide the energy needed to] arouse from hibernation," Jastroch told LiveScience.

Newborn human infants use it to maintain their body temperature, and while it was once thought that people completely lost it as they age, newer evidence suggests some adults retain bits of it.

"We wanted to know when this tissue evolved," Jastroch said. [Gallery: Evolution's Most Extreme Mammals]

Mammals' ability to regulate their body temperature allowed them to survive in cooler climates and diversify, but scientists debate how this capacity evolved.

Some contend that high body temperatures enable higher rates of resting metabolism  — the body's life-giving chemical reactions — which confers evolutionary benefits. Others argue that such benefits cannot compensate for the cost of losing so much energy from the body as heat, and therefore they say warm bodies must be a consequence of more exercise and bigger brains.

Jastroch and his colleagues chose to study the lesser hedgehog tenrec because it is one of the most ancient mammals, and because it can produce body heat but doesn't maintain it.

"It's somewhere between a reptile and a modern mammal," Jastroch said, adding that tenrecs may be the link between reptiles, which rely on external sources of heat, and modern mammals, which generate their warmth internally.

The researchers bred tenrecs in the lab, and surgically implanted the animals with temperature sensors. Then they exposed the critters to different temperatures and measured their metabolic rates. The scientists later dissected the animals to see where their brown fat was distributed, and isolated a heat-generating protein from the fat tissue to study how it works.

They found the heat-generating protein in the tenrecs' brown fat was just as potent as in a warm-blooded animal. The dissections revealed the animals' brown fat was not distributed over their neck and chest, like most modern mammals, but instead clustered around their sexual organs.

And yet, tenrecs don't have high body temperatures, and they don't experience cold in the wild, so nothing seemed to explain why they would "waste" so much energy to produce heat.

Studies have shown that tenrecs maintain high body temperatures during reproduction, so Jastroch and his colleagues hypothesized that the animals' brown fat might be there to incubate their reproductive cells, and increase the tenrecs' chances of producing offspring. But there's no way to prove this idea, Jastroch cautioned, because the ability evolved so long ago.

Biologist Barry Lovegrove, of the University of Kwazulu-Natal in South Africa, said the study confirms his own belief about the evolution of body heat, or endothermy. "Endothermy evolved in the dark and the hot, not in the cold," Lovegrove told LiveScience in an email, adding, "The employment by the ancestral, tropical mammals of brown adipose tissue to produce heat for efficient reproduction should make sense to any biologist interested in how mammals attain fitness."

The findings could be applicable to human studies of obesity, which is associated with the loss of brown fat. People are really interested in finding ways to activate brown fat, Jastroch said, and this work helps reveal how the mysterious tissue functions.