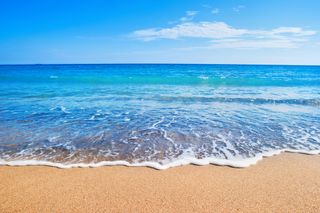 Why does sand look and feel the way it does?
(Image: © Beach photo via Shutterstock)

Summer wouldn't be complete without a trip to the sandy shores of an ocean, bay, lake or river. As the gritty stuff gets in between your toes, you may wonder why beaches are distinctive sandy stretches and why sand looks and feels the way it does.

And then again, you might not — you didn't come to the beach to think, did you? But for those in an asking mood, a sandy beach is essentially where pulverized, weathered rock along with some fragments of shelled creatures and other biota have collected, tossed up by the waves and as sediment from inland areas.

"Sand is basically the material you get when you get a breakdown in rocks, when the rocks weather and decompose over hundreds of thousands and millions of years," said Jeff Williams, senior scientist emeritus for the U.S. Geological Survey Woods Hole Science Center. [Stunning Sands Gallery: A Rainbow of Beaches]

Sand grits it out

Not every rocky mineral is equally built to last. So, over time, the weathering process yields certain common compositions for sand as the stronger materials persist.

"Some of the minerals are very unstable and decompose, while others such as feldspar, quartz and hornblende are more stable," said Williams. "They're harder, more resistant minerals, and so they tend to stay behind."

These minerals — abundant in Earth's crust — in ground-up form constitute a lot of the sandy particles comprising beaches. "Probably the most common composition would be quartz sand with some feldspar," said Williams.

This mineral formula gives beaches that sort of typically, well, "beachy" complexion of a light brown found in many places in the continental United States and elsewhere. "The iron staining on the quartz and iron oxide on the feldspar gives the sand that tan or brownish color, but this varies greatly," Williams told LiveScience.

Indeed, every beach is essentially a product of its regional and local environment, and is accordingly one-of-a-kind. [In Photos: The Top 10 Beaches of 2013]

"The sand on each beach is like a fingerprint — it's unique to the particular beach where you find it," said Williams. "The sand's unique composition, color and grain size are a result of the source rocks it came from, but also a result of coastal processes that modify the sand over long periods of time."

Examples of these processes include the types of waves and currents in an area, as well as the sea level history for that particular coast.

All of these variables intermix to create wildly different-looking beaches, depending on location. For example, in the Florida panhandle, Williams noted, the sand is often very white because of its high quartz content over feldspar and hornblende.

Farther south around Miami, the sand also trends fairly white, but for a completely different reason: A significant amount of the sand particles there are made of calcium carbonate, or the tiny bits of fragmented shells from sea life.

Tropical regions have more of this shell-derived sand than temperate regions, where the sand is mostly silica-based in the form of quartz.

Hawaii, meanwhile, is well-known for its black sand beaches, the result of ground-up, dark volcanic rocks. Some beaches on Hawaii's Big Island even have a greenish tint, thanks to the presence of the mineral olivine.

As a final sandy thought, consider the fact that the sand on most of our beaches, especially on the East and Gulf Coasts, is rather old: some 5,000 years or so, Williams said. Very little new sand reaches the coast nowadays from the continental interior as it once did.

The construction of roads, dams, and so on, is one reason. "Development along the coastline sort of impedes the transport of sand from the interior to the coast," said Williams.

The other major reason is a general rise in sea levels over the past approximately 12,000 years, which has flooded river valleys and created large estuaries such as Charleston Harbor, the Chesapeake Bay, Delaware Bay and the Hudson River. These estuaries trap would-be sand before it reaches the coast, Williams explained.

As a tie-in, the erosion of beaches especially after major storms often requires beach nourishment, or replenishment projects. Sand is dredged up from offshore and deposited on the shoreline to rebuild lost real estate.

Williams noted that these projects, while often successful, must contend with the different characteristics of sand one can get even in very close vicinities. "You have to pay careful attention to the aesthetics," said Williams. "People like to have the same sort of material on the beach as the native beach."