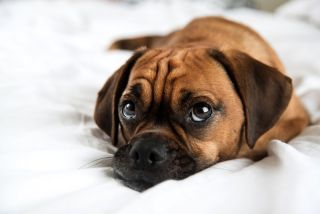 Couldn't you just eat me up?

Wayne Pacelle is the president and chief executive officer of The Humane Society of the United States (HSUS). This Op-Ed was adapted from his post on the blog A Humane Nation, where it ran before appearing in LiveScience's Expert Voices: Op-Ed & Insights.

I often say there are bad outcomes all around when humans are bad to animals.

When we at The HSUS work with law enforcement on raids of dogfights and cockfights, we often find other criminal behavior is taking place in these situations, like narcotics trafficking and illegal firearms possession. In homes where there is cruelty to animals, there typically are other forms of domestic violence toward children or girlfriends or spouses. And on industrialized factory farms, we often see fouling of the environment with massive manure loads and the routine dosing of healthy animals with antibiotics, which can produce antibiotic-resistant bacteria and threaten public health.

A number of industries we fight also have had a huge hand in allowing invasive species to colonize U.S. soil and create havoc. [Images: The Most Destructive Invasive Species]

For example, there are countless nutria — in the millions, perhaps — inhabiting Louisiana, Maryland and other states, competing with native species, weakening levees and otherwise wearing out their welcome. The nutria, also known as coypu, resemble beavers in appearance and are native to South America. They became established in the United States after they escaped or were released from U.S.-based fur farms.

In Florida, one of the most troublesome invasive species is the Burmese python. Studies from wildlife scientists have shown that many small and mid-sized animals in surveyed areas — from possums to raccoons to bobcats — are severely depleted or gone, due perhaps to the predation from Burmese pythons. These animals are native to Southeast Asia and came to the United States as a result of the exotic pet trade. Some pet owners have released these pythons, and others escaped after a hurricane hit south Florida several years ago. The U.S. Fish and Wildlife Service banned the commerce of Burmese pythons, but has not yet acted on trade restrictions for five other species of large constrictor snakes at risk of colonizing the United States and wreaking their own havoc.

Last year, Kansas passed a law banning people from possessing or transporting wild pigs, and in recent weeks New York and Vermont passed similar measures. These hyper-productive animals now number in the millions and are found in as many as 35 states. They are here, in part, because they escaped from private hunting ranches where they were offered up on a menu of animals to kill in fenced enclosures. Captive hunting is a condemnable practice where shooters pay for the privilege of killing semi-tame animals — even endangered species — that are confined for that purpose.

In Pennsylvania, which is home to a number of these canned hunts, the state legislature and Pennsylvania Governor Tom Corbett teamed up to pass legislation to allow the trade in wild pigs to continue. This was done despite concerns raised by the pro-hunting folks at the Pennsylvania Game Commission and the Pennsylvania Federation of Sportsmen's Club, as well as from environmentalists and The HSUS, all concerned about the ethics of captive hunting as well as the issue of invasive species threatening natural resources and the agriculture industry.

When someone is doing something wrong to animals, typically there will be financial, public health, public safety or ecological costs, frequently of a broad and lasting nature. But when we are good to animals, there are good outcomes down the line.

The views expressed are those of the author and do not necessarily reflect the views of the publisher. This article was originally published as The Repercussions of Callousness, Carelessness and Cruelty on the blog A Humane Nation.