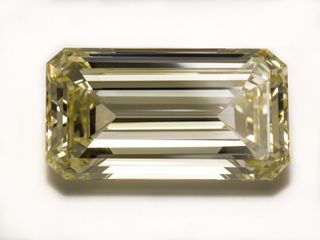 The stunning Kimberley diamond was found at a mine in Kimberley, South Africa.
(Image: © ©AMNH\D. Finnin)

The dazzling 55-carat Kimberley Diamond makes its debut at the American Museum of Natural History in New York Thursday (July 11).

The champagne-colored "cape diamond" was originally cut from a 490-carat stone found sometime before 1868 in the Kimberley Mine in South Africa. (A carat is a unit of weight equivalent to about a fifth of a gram, or about 0.007 ounces.) The diamond was later cut to 70 carats in 1921, and cut to its stunning present form in 1958.

The diamond, which is on loan from the Bruce F. Stuart Trust, is about 1.25 inches (3.2 cm), and virtually flawless, said exhibit curator George Harlow. The original diamond was fairly large, but there aren't many descriptions of it, so its history isn't well-known, Harlow told LiveScience. [Sinister Sparkle Gallery: 13 Mysterious & Cursed Gemstones]

Diamond is a form of carbon that is less stable than graphite, but stable at high pressures.

Most diamonds probably form underneath continents, but the process is somewhat mysterious. Carbon-containing fluids are thought to seep out of the deep mantle (the viscous layer between the Earth's crust and core), and enter the lithosphere (the outermost rocky layer). There, a chemical reaction turns them into diamond.

"You're talking on the order of 100 kilometers (62 miles) or more down into the Earth," Harlow said.

In order for the diamond to survive at the Earth's surface, it has to get there fast. The precious stones hitch a speedy ride on magma. The magma starts out very deep and moves toward the surface at 22 to 25 mph (35-40 km/h). During a volcanic eruption, the magma creates little bubbles, "like champagne," Harlow explained, adding that the debris can reach a speed of Mach 2 (twice the speed of sound).

"If you were there, you would see the most impressive explosion, then immediately be dead because of the shock wave," Harlow said.

Diamonds were first found in rivers, where people were looking for gold. Dense minerals tend to collect in the bottoms of rivers, streams and beaches, Harlow said. In the 1870s, people found diamonds in rivers in South Africa. They followed the river upstream and found a gray-blue rock, or "blue ground." This blue ground contained diamond, and because they were found in Kimberley, South Africa, they were called kimberlite.

A gem the size of the Kimberley diamond would not survive in modern mining techniques, Harlow said — it would be crushed during processing.

Even the diamond's current size of 55 carats is fairly large. "It would have been a bit of a bonker on a ring," Harlow said.