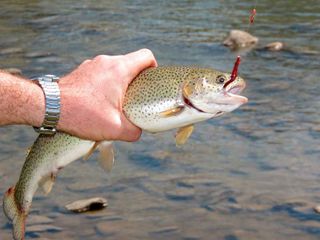 Does this hurt? Some claim that fish can't really feel pain, but others refute that claim.
(Image: © lsantilli | Shutterstock.com)

Do fish feel pain? The question is as old as angling itself, but it has never been answered definitively.

A recent study now concludes that fish lack the necessary pain receptors in their brains to experience pain the way humans and other animals do.

While fish have nociceptors — sensory receptors that respond to physically damaging objects and events by sending warning signals to the brain — these receptors don't function in the same way in fish as they do in humans, according to the study's authors. [5 Animals With a Moral Compass]

"Even if fishes were conscious, it is unwarranted to assume that they possess a humanlike capacity for pain," the authors of the study, published in the latest issue of Fish and Fisheries, wrote in the study's abstract.

The researchers claim that one group of nociceptors, known as C-fiber nociceptors, is responsible for pain in humans but is rare in finned fishes and absent in sharks, ray and skates.

Critics, however, say the scientists are ignoring several other studies that contradict their findings.

In a 2003 study, fish were injected in the lips with bee venom or an acid solution. The fish reacted immediately, rubbing their lips on the side or bottom of their tank, rocking from side to side and breathing at a rate comparable to that of a fish swimming at top speed, New Scientist reports.

And a 2009 study found that after experiencing a painful event, fish demonstrated defensive or avoidance behaviors, indicating the fish felt pain and remembered it.

"There are a number of studies which we believe provide enough evidence to show that fish do feel pain, and this remains our view," a spokesman for the Royal Society for the Prevention of Cruelty to Animals (RSPCA) told The Telegraph.

The argument over fish feeling pain has driven a wedge between anglers and animal-rights activists, but one of the study's authors feels the divisive debate is unproductive.

"I think that fish welfare is very important, but I also think that fishing and science is too," Robert Arlinghaus of the Leibniz-Institute of Freshwater Ecology and Inland Fisheries in Berlin, told The Telegraph.

"There are many conflicts surrounding the issue of pain and whether fish can feel it, and often, anglers are portrayed as cruel sadists," Arlinghaus said. "It's an unnecessary social conflict."