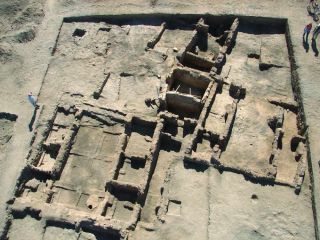 An aerial photograph of part of Hamoukar that dates back to the fourth millennium B.C. During this time Hamoukar was attacked and burned, the first known victim of urban warfare. Today the site is threatened by the effects of a modern-day war.
(Image: © Courtesy University of Chicago News Office, released in 2005)

An ancient city in Syria, which was the site of the earliest known case of urban warfare, now finds itself threatened by the effects of a modern-day war.

Around 5,500 years ago, before writing was even invented, the people of an ancient city called Hamoukar, located in modern-day Syria, were subjected to the horrors of urban warfare, the earliest case of this style of combat that scholars know about.

They were assaulted by a force armed with slingshots and clay balls. The attackers, possibly from a city named Uruk and perhaps motivated by Hamoukar's access to copper, succeeded in taking the city, destroying part of it through fire. [10 Ways Combat Has Changed Throughout History]

"The attack must have been swift and intense. Buildings collapsed, burning out of control, burying everything in them under vast piles of rubble," Clemens Reichel, one of the team leaders of the University of Chicago Oriental Institute's Hamoukar Expedition, said in a 2007 University of Chicago news story.

Today, more than 5 millennia after the battle, the horrors of urban warfare are being revisited on the modern-day people of Syria. But rather than slingshots, they face automatic gunfire, helicopter gunships and, as Western intelligence agencies have now verified, chemical weapons.

The conflict has killed more than 60,000 people and resulted in more than a million refugees being forced to flee the country. It has also damaged and otherwise put in peril numerous historical sites, including Hamoukar.

The area where Hamoukar is located has been spared much of the warfare that has hit the country, but the ancient city has been impacted in other ways, said Reichel, who said the expedition's Syrian co-director was able to visit the Hamoukar site in 2012.

Without a local authority able to protect antiquities, the ancient city has undergone a modern-day building boom. Also, the team's co-director "noticed that there was a big bulldozer cut on the site right next to our dig house," said Reichel, who is now a curator at Toronto's Royal Ontario Museum and a professor at the University of Toronto. "As I remember, it was about 25 meters (82 feet) long and 3 meters (10 feet) deep, so that's a very sizable cut," which, it turned out, was dug by a contractor building an addition for a school building.

In addition to threatening antiquities on the site, these new buildings will make it difficult for archaeologists to resume work on Hamoukar and protect the site in the future.

"If there's ever a way back to Hamoukar, we have to really fight an uphill battle there to protect the site," Reichel said, adding that the newly erected buildings would have to be taken down wherever possible. "That's going to be a major challenge," he noted.

In addition, the artifacts the team has already discovered are in danger, as they are being held in a museum at Deir ez-Zor, located about 150 miles (240 kilometers) southwest from the Hamoukar site. [In Photos: Archaeology Around the World]

"Deir ez-Zor has seen a lot of violence and a lot of destruction," he said, adding that he's not entirely sure what the situation is at the museum. "I have to say, I'm not particularly optimistic; I think it's quite possible that it [the museum] will see damage as well, and it's a museum that will be looted." Some ceramic, faunal and archaeobotanical samples, of no commercial value, that were being kept in their dig house may also be lost.

Yet another risk is the possibility of a new insurgent group taking over the area. The Guardian reported last month that Jabhat al-Nusra, which the U.K. news outlet says is associated with al-Qaida, is moving into the province where Hamoukar is located, taking control of oil fields from Kurdish groups.

Reichel emphasized that although Hamoukar is impacted by the war, it hasn't suffered as harsh a fate as historical sites in western Syria, where the bulk of the fighting has taken place.

"I don't want to single out Hamoukar; what is happening in western Syria is really the big tragedy," he said, noting places that have taken greater damage, such as Palmyra, Aleppo and sites in Damascus. "Those are, of course, really at major risk, and this is where most of the warfare and related conflict seems to be going on."

Archaeology in Iraq is still recovering from the effects of the 2003 U.S. invasion but there are positive signs in the south of the country said Reichel, who recently visited the area, assessing the possibility of future archaeological projects.

"We encountered guards virtually everywhere, and that's very encouraging of course," he said, emphasizing that he can only speak of the archaeological sites he saw in the far south of Iraq around Basra and Nasiriyah. "Things are definitely getting better; the security situation is much improved," he said, noting that there are still some major challenges that need to be overcome.

In part of northern Iraq, the situation for archaeologists is better. "There's a lot of fieldwork going on in the north, in Kurdistan, which is a semiautonomous region, but in southern Iraq, we'll have to see what the security situation is going to be like," Reichel said.

"This is one of the challenges," he said. "The other one is that the costs of working, or even traveling in Iraq, are still very high, partly because we still have to pay for security."

Nonetheless, Reichel thinks that in time, archaeologists will come back to the southern part of the country. "I think it's going to be a slow process of recovery," he said.

Toronto's Royal Ontario Museum is set to open a major Mesopotamian exhibition featuring over 170 artifacts, many from London's British Museum, on June 22. The museum is also running a concurrent exhibit that looks at the looting in Iraq that occurred after the U.S. invasion in 2003.