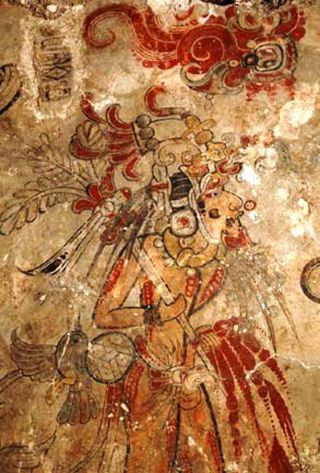 In 2008 a grant for $575,251 was given to the Conservation Foundation of Guatemala to help conserve the pre-classic Maya murals of San Bartolo (one fragment pictured here), conserve the Maya Temple of the Hieroglyphic Staircase and document looting at Yaxha-Nakum-Naranjo National Park.
(Image: © Image courtesy Wikimedia)

TORONTO — The fictional archaeologist Indiana Jones has long enthralled movie audiences, taking on assorted villains in quests to find mythical treasures, with some limited help from the government.

Minus any bullwhips, the real-life U.S. State Department works with other federal departments in a journey to protect important archaeological sites and ancient treasures in the face of conflict, according to professional archaeologists Morag Kersel and Christina Luke in their new book "U.S. Cultural Diplomacy and Archaeology: Soft Power, Hard Heritage" (Routledge, 2012).

Luke and Kersel both worked with the U.S. State Department's Cultural Heritage Center (in Kersel's case, as a contractor). They met on Luke's first day of work, Sept. 10, 2001, the day before the 9/11 attacks, and in the years ahead they saw the State Department's role in overseas archaeology (particularly antiquities preservation) grow and transform.

"We witnessed the transition of an office that had been working diligently behind the scenes with little recognition or support from the U.S. Department of State to an entity that has become, by cultural heritage standards, a major funding source, intellectual resource and a prominent player in establishing U.S. approaches to cultural policy and programs on the international level," they write. [In Photos: Archaeology Around the World]

Kersel discussed the book at a recent presentation at the University of Toronto in Canada.

Government support for overseas archaeology is nothing new. For instance, in the 19th and 20th centuries the American government helped set up overseas research centers throughout the Old World in places like Rome, Athens, Cairo and Jerusalem, centers that now face budget cuts.

With the wars in Afghanistan and Iraq, the State Department's role in archaeology changed, say Luke and Kersel. The looting of Iraq's National Museum and archaeological sites put pressure on the department to help rebuild Iraq's cultural infrastructure and expertise. That looting also put pressure on American diplomats to try to improve America's global image.

When American troops first entered Baghdad, "the coalition forces had a tank in front of the oil ministry, but not the museum or other cultural institutions in Baghdad," said Kersel in her Toronto presentation, noting that the coalition had been warned beforehand that the museum should be a priority. [Fight, Fight, Fight: The History of Human Aggression]

"So outraged was the worldcitizenry at the ongoing situations in Afghanistan and Iraq and the failure to protect 'the world'sheritage' that the United States has been forced to explore and demonstrate the importance of archaeological heritage to local, national and international communities," write Kersel and Luke.

Conservative controversy and the Ambassadors Fund

One program, which was initially established shortly before the 9/11 attacks, the Ambassadors Fund for Cultural Preservation (AFCP) aims to conserve sites and antiquities in developing countries, while also recording indigenous craft techniques and languages. To date, the fund has given out more than $29 million to more than 650 projects around the world, researchers noted.

The overseas grants were aimed at small projects, initially, with little input from Washington officials. However, "as world events occurred and foreign relations changed, so too did the funding directions of the AFCP." In 2004, a U.S. Senate report recommended increasing the amount of annual funding for the program to $1.75 million but stipulated that $700,000 was to be used in the Middle East.

The use of taxpayer dollars to conserve historic sites, especially Islamic sites, created controversy among some conservative groups. The American Family Association said in a 2010 posting that $6 million had gone to "to restore 63 historic and cultural sites, including Islamic mosques and minarets, in 55 nations." Some Republicans in Congress also took issue with the program, and last year put forward a bill to end it.

However, as part of Kersel and Luke's study, the researchers found that just under $3 million (or about 10 percent of the money granted) went to Islamic projects. Historic sites from other religions, including Christianity, Judaism and Buddhism, also received conservation grants.

The use of public dollars to conserve historic religious sites also raised questions about the separation of church and state. But legal rulings came down on the side of the fund, the researchers said. "Recently, the U.S. Department of Justice found that the Constitution's establishment clause does not preclude the use of federal funds to preserve places of religious significance, of any religion, if such initiatives serve the goals of society," said Kersel.

In 2008, the AFCP created a system of large grants. "These awards fall outside of the annual (competitive) call for proposals and are strategically targeted at particular sites and countries," write Kersel and Luke. In 2010, the fund awarded $2 million to conserve the Ishtar Gate in Babylon, Iraq.

Luke and Kersel note that the first large grants went to projects in Guatemala, Cambodia and Afghanistan. In each country, the funds are meant, in part, to address past or current U.S. actions.

Afghanistan, of course, is the site of a present-day war. In Cambodia's case, "recalling the debacle of Vietnam, the United States continually seeks to portray a friendly face in Cambodia," whereas in Guatemala "the AFCP funds may serve to ameliorate the atrocities committed by the Central Intelligence Agency of the United States in rural Guatemala in the 1950s and 1980s," write Luke and Kersel.

After the Iraq war, the United States also initiated the Iraq Cultural Heritage Project, which cost $13 million dollars, as announced in 2008. The project supports the rebuilding of museums and archaeology organizations as well as the creation of a conservation institute in Erbil, an area primarily populated by the Kurdish minority. This project also supports the training of Iraqi scientists within the United States and Iraq.

"We would argue that this initiative is an element of statecraft in which the U.S. demonstrates a kinder, gentler side of their foreign relations," said Kersel.

Luke and Kersel raise concerns about how the training of the first group of American-bound Iraqi scientists was handled. They say that, before the program began, the Iraqi scholars did a month of intensive English-language training,"after which, all participants were to be able to understand all instruction (oral and written) in English."

A "professional training program in Arabic, rather than English, would serve this purpose [training experts] far more directly, rather than attempting to embed yet another diplomatic goal of English-language training," they write.

In Erbil, Iraq, they don't have this problem. "Simultaneous translation is now the norm in all conservation programs run by the Erbil Institute: English, Arabic and Kurdish," they write. "The placement of the institute in Erbil was a strategic choice, as the region was and is the most stable. It has hadanother, perhaps unintended, but positive result: bringing Americans, Iraqis and Kurds together to learn about conservation techniques and the cultural heritage of the region."