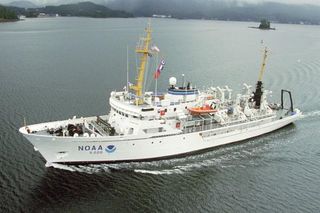 Frances Beinecke is the president of NRDC, served on the National Commission on the BP Deepwater Horizon Oil Spill and Offshore Drilling, and holds a leadership role in several environmental organizations. She contributed this article to LiveScience's Expert Voices: Op-Ed & Insights.

People living in Savoonga, Alaska, like to call their village the "Walrus Capital of the World." The village sits at the mouth of the Bering Strait, and roughly 80 percent of all North Pacific walruses migrate through those narrow waters every year. They are joined by hundreds of thousands of whales, dolphins and other marine mammals and an estimated 12 million seabirds. These animals gather in the Bering Strait for one of the largest wildlife migrations in the world.

Arctic coastlines have been compared to the Serengeti because of their abundant wildlife corridors, but what many people don't realize is that deep beneath the water's surface, another vast migration unfolds every spring and fall. The Bering Strait becomes the Serengeti of the oceans during those seasons, and the abundance of animal life has fed Yup'ik people and cultural traditions for millennia.

Now, climate change has begun to threaten those traditions. Native Alaskan leaders tell me that melting sea ice has made subsistence hunting far more difficult. And warming temperatures introduced another threat to native customs and the marine mammals they depend upon: industrial shipping.

The Northern Sea route — connecting Asia and Europe by skirting along Russia's far north — has been frozen for much of human history, but climate change has caused the ice to shrink to record-breaking lows, and shipping companies are swooping in. The amount of cargo sent along the Northern Sea route is still relatively small, but it increased ten times since 2010, and Reuters recently reported that traffic along the route could expand thirtyfold in the next several years.

Most of those ships will cut through the pristine waters of the Bering Strait. Funneling traffic through these vibrant waters is like building a heavy-truck corridor through the bison, wolf and grizzly habitat of Yellowstone National Park, or carving a shipping lane through the Great Barrier Reef.

Marine mammals will be among the first to suffer. The Bering Strait is only about 50 miles wide. It is home to one of the largest marine mammal migration paths in the world, and those creatures swim through the same ice-free pathways the ships will travel. Collisions between the two will increase and could prove deadly for the animals as it has in other oceans, including in the North Atlantic, where ship strikes are the key source of mortality for endangered right whales.

Spills are another hazard. Russian companies have already sent huge tankers of liquefied natural gas to ports in China and Japan. The route had to be cleared by three Russian ice breakers, and no technology has been proven to clean up oil in sea ice.

Yet one of the biggest threats comes from ocean noise pollution. Whales and other marine mammals depend on hearing for life's most basic functions. They use sound to locate food, find a mate, avoid predators, connect with friends and family and navigate their way through the world. Walrus and seal hearing can be so keen that native hunters learn to walk on ice in ways that don't make any noise.

Giant cargo ships and nuclear-powered icebreakers take no such precautions. Their booming sounds carry great distances underwater and can scare marine mammals from feeding spots, silence them, drown out the sounds they rely upon and prevent them from feeding and breeding. This is especially a concern in the Arctic. Sound travels more readily through acidic waters, and the cold seas of the North have turned more acidicas more carbon pollution gets pumped into the atmosphere. In other words, climate change is hitting marine mammals with a triple whammy: warming temperatures are making it possible for shipping traffic to increase, and at the same time, ocean acidification threatens important food sources and makes ship traffic even more destructive for sound-guided animals.

These are alarming trends, but our society has an enormous opportunity in the Bering Strait and other Arctic waters. Nations can put safeguards in place now, before industrialization overtakes the region.

People have polluted, despoiled and overfished every other ocean on Earth because we thought the oceans could bear it. Now that most of the world's fisheries are at or beyond their limits and vast waters have been turned into plastic gyres, dead zones, or sewage waste bins, we know the seas cannot withstand unchecked development. The Arctic gives us a chance to learn from our mistakes and get ocean management right from the start.

Protecting the rich marine life of the Bering Strait is a critical part of smart management. NRDC has worked in the region for decades, and now the world's oceans, marine mammal and climate experts are working to prevent ships and other industrial activity from despoiling biological hotspots within the region. For example, NRDC and its partners are on the verge of securing international noise-quieting guidelines for commercial ships and are working to establish speed restrictions in the Arctic for industrial vessels.

These and other measures will help make marine mammals more resilient in the face of a changing climate. They will help sustain native villages that rely on healthy seas for food and cultural survival. And, they will show that when given the opportunity, the human community chose to protect the Serengeti of the oceans.