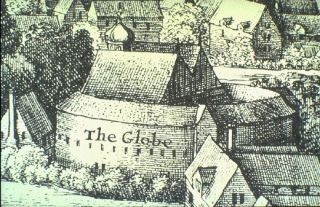 Kids in Shakespeare's plays at London's Globe Theater may have been lucky compared to some of their contemporaries; new research shows that many boy players were exploited and abused.
(Image: © Public Domain)

In Shakespeare's England, many kids were coerced into acting careers not by stage moms but by "child catchers," new research shows.

Elizabethan-era boy players were prized in adult theater companies for their prepubescent looks and high-pitched voices, which allowed them to act in female roles alongside men. But some boy players were put into all-children acting troupes, and not all of them voluntarily; rather many were systematically exploited and abused, according to an Oxford University scholar.

While writing his new book "Shakespeare in Company" (Oxford University Press), Bart van Es found that child catchers seized young boys on their way to school, handing them over to theater company bosses that forced the kids to perform on stage or else face whipping. Van Es even found documents that show Queen Elizabeth I herself signed commissions allowing theaters to kidnap children, he said.

"Technically these warrants were designed to allow the Master of the Children to 'take up' boys for service in the Chapel Royal," which was a group of priests and singers established to serve the British monarchy, van Es explained.

"But the reality was very different. It was well known that the Children of the Chapel Royal was really an acting company, and the Queen did nothing to intervene," van Es said in a statement.

The researcher recounted one case of a father who tried desperately to recover his son who was spirited away to the Blackfriars playhouse. That boy, 13-year-old Thomas Clifton, was allegedly dragged off by a group of theater men in 1600, the year that children's acting companies were restored after a 10-year ban.

"When his father attempted a rescue by turning up at the playhouse he was contemptuously dismissed and told that if his son did not learn his lines he would be whipped," van Es said.

Children's troupes were often forced into performances with pedophilic overtones in seedy semi-dark theatres that attracted predominantly male audiences, according to the researcher.

"The playwright Thomas Middleton, for example, described one children's company as a 'nest of boys able to ravish a man,'" said van Es.

And certain plays seem more disturbing in light of van Es' findings, such as Christopher Marlowe's "Dido, Queen of Carthage," which features a boy named Ganymede who is "dandled" on the knee of the god Jupiter, offered gifts and asked to indulge in play.

To his credit, William Shakespeare did not use captive children in his company; his boy players were apprentices playing the roles of women.

"Shakespeare actually comes out of this rather well," Van Es said.

Shakespeare's "Hamlet," written in 1600, even includes a sly reference to the revival of children's theater.

"In the play, the actors have come to visit Hamlet in Denmark because competition from the boy players has driven them from London," van Es said. "They even perform a scene that parodies 'Dido, Queen of Carthage,' which Marlowe originally wrote for the boys of Blackfriars."