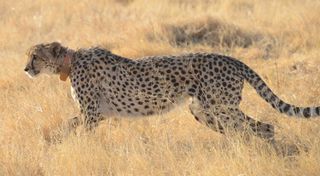 Cheetahs may hold the distinction of being the fastest animals on land, but these elegant felines actually owe their hunting prowess to their ability to rapidly accelerate and maneuver around tight turns, a new study finds.

A team of researchers monitored five wild cheetahs in northern Botswana and found that despite clocking top speeds of nearly 60 mph (97 km/h), cheetahs use their agility — rather than simply relying on a furious pace — to track down prey.

"Cheetahs have a very high top speed, but they don't always use it,” said study lead author Alan Wilson, a professor in the department of comparative biomedical sciences at The Royal Veterinary College in the United Kingdom.“What was more remarkable was the maneuverability and acceleration that they displayed."

Wilson and his colleagues designed special GPS-tracking collars for their cheetah subjects that collected precise data on the animals' location, speed, acceleration and deceleration. [Cat Album: The Life of a Cheetah]

Over the course of 367 runs in 17 months, the cheetahs recorded a blistering top speed of 58 mph (93 km/h), far outpacing greyhounds, racing horses and humans, the researchers said. On most runs, however, the cheetahs kept a more modest pace, averaging 31 mph (50 km/h), Wilson said.

"They're doing about half their top speed, so they're not moving extremely quickly when they hunt," he told LiveScience.

The researchers used the extensive information collected by the collars to map out the running behaviors of wild cheetahs on the prowl.

"Runs started with a period of acceleration, either from stationary or slow movement (presumably stalking) up to high speed," they wrote in the study, which was published online today (June 12) in the journal Nature. "The cheetahs then decelerated and maneuvered before prey capture."

The acceleration and turning speeds measured from these cheetahs either match or exceed the known speeds of all other land mammals, the researchers said. In fact, cheetahs are so agile they can increase their speed by up to 6.7 mph (10.8 km/h) in a single stride, the researchers added.The calculated muscle power output during these sustained accelerations is the highest of any land mammal, and roughly four times greater than that exerted by Jamaican sprinter Usain Bolt during his world-record-breaking 100-meter sprint in 2009, they added.

Of the 367 runs studied, 94 resulted in the cheetahs capturing their prey, contributing to a success rate of about 26 percent. The researchers also examined where the cheetahs preferred to chase down their meals: Nearly half, or 48 percent, of the runs occurred on open grasslands, 28 percent were carried out around large trees and 24 percent happened in areas of thick vegetation cover.

Although trees and shrubs may offer cheetahs better means to stalk prey, the researchers did not find significant differences in the speed or distances run across the various terrains.