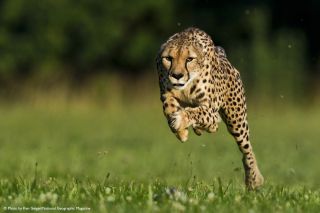 The fastest cheetah on Earth has done it again, breaking her previous world record for the 100-meter dash and setting a new best time of 5.95 seconds.

This feat surpasses the fastest of all human 100-meter sprinters by almost four seconds. Usain Bolt, a Jamaican sprinter now competing at the 2012 London Olympics, holds the human world record at 9.58 seconds in the 100-meter dash.

Cheetahs, of course, are built to run faster than humans, regularly clocking speeds of up to around 60 miles per hour (96.5 kilometers per hour). During a photo shoot with National Geographic Magazine, a cheetah from the Cincinnati Zoo named Sarah covered 100 meters and clocked a peak speed of 61 mph (98 kph).

The sprint broke Sarah's previous world record, set in 2009 when she ran the same distance in 6.13 seconds. That sprint broke the previous record set in 2001, when a male South African cheetah named Nyana ran 100 meters in 6.19 seconds. [See Photos of Sarah the Cheetah]

Sarah is 11 years old and is part of the zoo's Cat Ambassador Program. Her sprint was documented with funding from the National Geographic's cat conservation effort the Big Cats Initiative.

The record-breaking run took place on a course designed by the Road Running Technical Council of USA Track & Field. Sarah chased a fluffy toy lure around the course, breaking the record on her very first run.

Cheetahs are endangered in the wild, with an estimated 9,000 to 12,000 living outside of zoos today.

Editor's Note: This story was updated to correct the cheetah's peak speed.