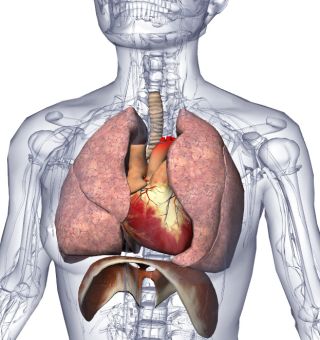 Here is a closeup view of the heart, lungs and diaphragm.
(Image: © The BioDigital HumanTM developed by NYU School of Medicine and BioDigital Systems LLC)

Ten-year-old Sarah Murnaghan, who has cystic fibrosis, is awaiting a lung transplant that could save her life, but the procedure is not a cure for her condition, and comes with significant risks, research shows.

Cystic fibrosis is a genetic condition in which the body produces abnormally thick mucus, which builds up in the lungs, pancreas and digestive tract. As a result, the condition causes breathing and digestive problems, and puts patients at risk for infections. The average life expectancy for cystic fibrosis patients is in the mid-30s, according to the Cystic Fibrosis Foundation (CFF).

Patients with cystic fibrosis need lung transplants when the damage to the lungs is so severe that doctors can do nothing more to treat them, said Dr. Maria Franco, a pediatric pulmonologist and director of the cystic fibrosis center at Miami Children's Hospital.

However, lung transplants in cystic fibrosis patients are controversial because some studies suggest the procedure does not prolong life or help patients live better on a day-to-day basis, according to the Mayo Clinic.

What's more, cystic fibrosis patients who undergo a lung transplant need to take immunosuppressive drugs that put them at even greater risk of infections, the CFF says. (Bacteria already in the body from previous infections may infect the new lungs.) Patients are also at risk of organ rejection.

In a 2007 study, researchers at the University of Utah examined the risks and benefits of lung transplants for cystic fibrosis patients. They looked at 514 children with cystic fibrosis on the waiting list for a transplant, including 248 who did receive a transplant. Less than 1 percent of the transplant patients benefited from the procedure, the researchers concluded.

The study was published in the New England Journal of Medicine.

Some patients do much better after a lung transplant because the lung damage is the driving factor behind the illness,Franco said. "Once you fix that part, everything else is much easier to take care of," she said.

Franco said that of the three patients she has treated who have undergone lung transplants, two are doing very well. Both were teenagers when they underwent the transplant, and one has since finished college. But the third patient caught an infection and died, she said.

The first year after a transplant is the most critical, and doctors are on the lookout for complications they know can arise, Franco said.

Because it is not common for cystic fibrosis patients to have severe lung damage as young children, those who undergo the procedure are typically teenagers, Franco said.