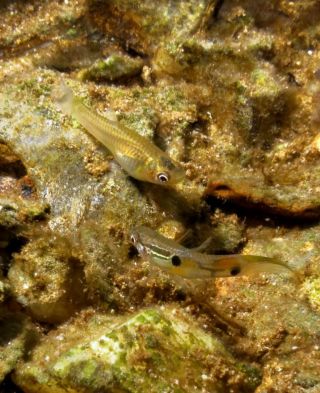 As much as a quarter of Trinidadian guppy offspring are sired by dead males.
(Image: © Paul Benzen)

A new study shows that female Trinidadian guppies can store and use sperm from males long after the males die. Up to a quarter of guppy offspring are sired by dead males, maintaining a diverse gene pool even in harsh environments, the study showed.

In many species — including ants, turtles, bats and even whale sharks — females can save up sperm in their reproductive tract and use it later to fertilize eggs and produce offspring. Sometimes, sperm can be stored sperm for more than a year. But previously, this phenomenon had been observed only in the laboratory.

"This is the first study to my knowledge that looks at the reproduction of dead and live males in a wild population," study researcher Andrés Lopez-Sepulcre, an evolutionary biologist at The École Normale Supérieure de Paris, told LiveScience. [Sexy Swimmers: 7 Facts About Sperm]

Lopez-Sepulcre and his colleagues studied the posthumous reproduction of the Trinidadian guppy (Poecilia reticulate). Female guppies have sacs in their ovaries that can store sperm, and the fish are known to produce offspring in the lab even when males are no longer present.

The researchers used data from a guppy introduction experiment in a tributary of the Guanapo River, in the northern mountains of Trinidad. They captured guppies, bred them, marked each one and took DNA samples in order to construct family pedigrees. They then released guppies back into the stream.

It turned out that the number of offspring and the number of fathers didn't add up — until the researchers started counting dead males. Over the course of the experiment, the percentage of fish sired by dead fathers was about 14 percent. By the last month of the experiment, as many as 25 percent of the offspring had been conceived after their father's death, Lopez-Sepulcre said.

The female guppies live much longer than males, on average, and the females' ability to store sperm benefits both sexes. Sperm storage allows short-lived males to expand their reproductive lifespan and pass on their genes even after they're dead. Sperm held within a female's body may also be able to survive stressful seasonal conditions that adult males cannot.

For the females, keeping a supply of sperm allows them to reproduce even when mates are scarce. Furthermore, sperm storage may be what biologists call a "bet-hedging strategy," in which females maintain genetic diversity that allows the population to adapt to different environments.

The findings show that animal populations have hidden sources of genetic variation, Lopez-Sepulcre said. In this case, the mantra "survival of the fittest" can be misleading.

"Evolution has never been about survival of the fittest — it's about reproduction of the fittest," Lopez-Sepulcre said. The findings were detailed today (June 4) in the journal Proceedings of the Royal Society B.