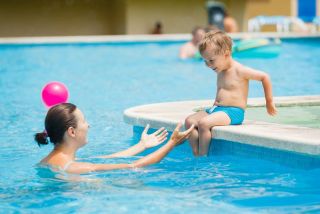 To keep E. coli and other nasty bugs out of pools, swimmers should shower before they take a dip.
(Image: © Max Topchii | Shutterstock)

Thousands of outdoor pools have just opened up around the country for a summer season of heat-defying, splashy fun. These communal bathtubs, however, can get just a wee (pun intended) bit gross at times, what with the many dozens of bodies dipping in and out of them all day long.

To prevent pools from potentially becoming cesspools, operators have long relied on the disinfecting power of chlorine. In the early 1900s, chlorine started being used to treat drinking water. Along with filtration and other sanitation methods, the chlorination of pool water, which caught on nationally around the 1920s, has helped keep pool-borne illnesses largely in check.

So just how does chlorine work its sanitizing magic? When chlorine — sold as a granular powder, liquid or sometimes in its elemental form as a gas — is added to water, it forms a weak acid called hypochlorous acid. This acid is very proficient at killing bacteria such as salmonella and E. coli, and it also knocks out many viruses.

"Hypochlorous acid from chlorine-based pool sanitizers is really the key to germ destruction in the water," Ostrowski said.

A key property making hypochlorous acid lethal to microbes is the acid's neutral electrical charge. The cell walls around bacteria have a net negative charge, thus repelling other negatively charged particles in the water. Hypochlorous acid, however, being neither positively nor negatively charged, can make contact with and invade bacterial cells.

"The hypochlorous acid is able to breach the cell walls of pathogens," Ostrowski said.

Once inside the bacterium, the hypochlorous acid wreaks havoc by chemically interacting with proteins, causing them to lose their complex, origamilike structures. The proteins' functionality deteriorates, and the cell starts to die.

"Proteins are really the workhorse molecules of cells," Ostrowski told LiveScience. "They're involved in all of the bodily functioning of humans and also bacteria. And once you destroy the proteins, you've really taken away the ability of the bacteria to thrive."

Against viruses, Ostrowski said, chlorine's mode of action is less understood, but it works at shutting down influenza and other illness-causing varieties.

Certain protozoa, however, such as diarrhea-inducing (and transmittable) Cryptosporidium and Giardia, which have protective outer shells, are very tolerant of chlorine. The best way to avoid infection from these nasty parasites is to keep people, especially children, who have diarrhea out of the pool in the first place, said Hlavsa.

Importantly, in order for chlorine to do its job against susceptible pathogens, the pH, or acidic-basic scale ranging from 0 (most acidic) to 14 (most basic), of the pool water must be maintained within a certain range. The CDC recommends the chlorine concentration stay between one and three parts per million and the pH between 7.2 and 7.8. "That's the range at which chlorine is most effective," said Hlavsa. If the water pH gets too high, hypochlorous acid won't form as readily, and a too-high or too-low pH can also cause eye and skin irritation.

Hlavsa pointed out it's a popular misconception to blame chlorine for reddened eyes and that strong, stinging smell especially associated with indoor pool facilities. Rather, compounds called chloramines — formed when chlorine reacts with sweat and urine — irritate our eyes and airways.

People sometimes think that a noxious smell around a pool "is a good thing," Hlavsa said, indicating that plenty of chlorine is on hand. Instead, the strong odor is more a reflection of the "hygienic practice of the swimmers in that pool," she said, and its presence means less free chlorine is available in the water to kill germs.

So, Hlavsa said, before jumping in, pool-goers should shower to wash off sweat, urine and feces. In a sign of how these preswim showers are not being taken like they should, a recent study by the CDC found genetic material from E. coli, which typically resides in the human gut and feces, in 58 percent of the public pools they tested during the summer of 2012.

"People are not taking preswim showers and fecal material is washing off their rear ends," Hlavsa said.

Next time when taking a dip, in other words, shower up beforehand. That way, the water won't get so funky and pathogens won't be able to throw a party of their own in the pool.