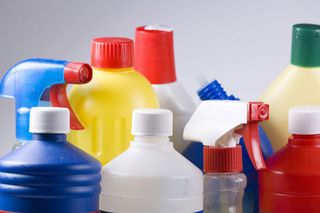 For 200 years, chlorine bleach has been the go-to chemical for obliterating germs, but scientists are just beginning to uncover how the caustic stuff kills bacteria and other microbes.

A team of molecular biologists has now revealed part of the process by which bleach eliminates microbes by accident.

"As so often happens in science, we did not set out to address this question," said Ursula Jakob of the University of Michigan, who headed up the study. "But when we stumbled on the answer midway through a different project, we were all very excited."

Jakob and her team were studying a bacterial protein known as heat shock protein 33 (Hsp33), which acts as a "molecular chaperone," protecting proteins from reactions that could harm them. Hsp33's role is particularly important when cells are under stress, for example when temperatures rise because of a fever.

"At high temperatures, proteins begin to lose their three-dimensional molecular structure and start to clump together and form large, insoluble aggregates, just like when you boil an egg," said study lead author Jeannette Winter, one of Jakob's postdoctoral researchers. Like a boiled egg, those proteins can never revert to their previous state, and the stressed cells eventually die.

Jakob and her team found that a particular chemical in chlorine bleach, hypochlorite, has a very similar effect on proteins as heat stress does. Just like heat, hypochlorite causes the proteins to clump together.

"Many of the proteins that hypochlorite attacks are essential for bacterial growth, so inactivating those proteins likely kills the bacteria," said study team member Marianne Ilbert, also a postdoctoral researcher in Jakob's lab.

While using bleach will certainly kill the germs on your kitchen counter or in your tub, it is also hazardous to the environment after it's washed down the drain, as well as to your health if the room you're working in isn't properly ventilated.

Cleansers with bleach also promote a climate of germophobia in America, some experts have said, noting that you only need to wipe away the germs, not kill them. Using antimicrobial products excessively can contribute to antibiotic resistance by weeding out the weaker germs and leaving only the ones that are harder to kill.

Jakob and her team's findings, detailed in the Nov. 14 issue of the journal Cell, also shed light on how our bodies fight off bacterial infections. Our own immune cells produce hypochlorite as a first line of defense to kill invading microbes. Unfortunately the hypochlorite also damages the body's cells — this is thought to be the cause of tissue damage at sites of chronic inflammation.

The study was funded by the National Institutes of Health, a Rackham Predoctoral Fellowship, and a postdoctoral fellowship from the Leopoldina Gesellschaft Deutscher Naturforscher.