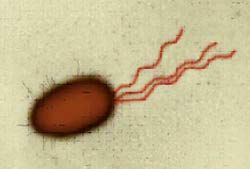 Transmission Electron Microscopy photograph of an Escherichia coli bacterium with flagella. Micro-robots are being developed to mimic the swimming behaviour of E.coli.
(Image: © Monash University)

Bacteria may be humble single-celled creatures, but they're sophisticated enough to anticipate regular events, such as the arrival of day, thanks to their internal circadian clocks. A new study shows that they can also anticipate and prepare for sporadic events, as long as the events are reliably preceded by a signal.

What kinds of events? Well, to colonize the gut of a mammal, Escherichia coli must first enter the warm-blooded diner's mouth, where the bacteria experience a temperature rise; a short time later, they end up in the intestines—a place with low oxygen levels, as well as fierce competition from other microscopic settlers.

Bacteria would do well to anticipate low-oxygen conditions and begin to adjust metabolically from the moment they enter the mouth.

Indeed, when Ilias Tagkopoulos, his graduate advisor Saeed Tavazoie, and Yir-Chung Liu, all at Princeton University, cranked up the heat on E. coli in the laboratory from 77 to 98.6 degrees Fahrenheit, the bacteria immediately deactivated genes involved in aerobic respiration (which requires oxygen) and activated genes governing anaerobic respiration (which doesn't).

Then the team repeatedly exposed a population of E. coli to a rise in oxygen following a rise in temperature, a sequence unlikely to occur in nature.

The bacteria's native low-oxygen response all but vanished within a hundred generations, confirming that their foresight is flexible and results from natural selection.

The finding was detailed in the journal Science.