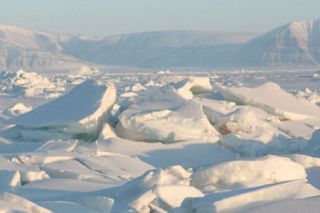 Even during the deep freeze of the last ice age, the waters of the deep Arctic Ocean churned below the frozen ice cap, new research finds.

Scientists thought that these waters slowed or even stopped during this time, but analysis of sediment from the bottom of the ocean shows that these waters have been churning for the past 35,000 years under wildly different climates.

The deep basins of the Arctic are flushed by water that is created as sea ice forms at the ocean's surface; the water that freezes into ice leaves water enriched in salt behind, which sinks to the ocean bottom. The waters of the deep Arctic are a critical branch of the global ocean circulation, which moves heat around the planet along with atmospheric circulation. In the modern ocean, these waters flow into the North Atlantic, where they help bring oxygen and salt to the rest of the world's oceans, according to a release on the research from Columbia University's Lamont-Doherty Earth Observatory. [10 Things You Need to Know About Arctic Sea Ice]

Researchers from Lamont-Doherty and the Woods Hole Oceanographic Institution in Massachusetts investigated the past flow of the deep Arctic waters by examining the amounts of a product of radioactive decay in the sediments buried on the ocean floor. (The sediments came from cores drilled from the ocean floor during a 1994 research expedition.) Rivers wash sediment into the oceans; this sediment contains uranium, which decays into thorium and protactinium. These two elements attach to particles in the water, which fall to the ocean floor. The amount of the elements in the buried sediments can tell researchers whether the deep water was flowing fast enough to flush the sediments out.

The study, detailed in yesterday's (May 30) issue of the journal Nature, found that there was less protactinium than would be expected if the deep water flow stagnated.

"The Arctic Ocean must have been flushed at approximately the same rate it is today regardless of how different things were at the surface," said study co-author Jerry McManus of Lamont-Doherty.

The study results suggest that sea ice was being formed at the surface and then melting seasonally as it does today.

"There must have been significant melt-back of sea ice each summer even at the height of the last ice age to have sea ice formation on the shelves each year. This will be a surprise to many Arctic researchers who believe deep water formation shuts down during glaciations," Robert Newton, a Lamont-Doherty oceanographer who wasn't involved in the study, said in a statement.

In the future, the researchers hope to find where the sediment with the protactinium was flushed to.

"It's somewhere," McManus said in the release. "All the protactinium in the ocean is buried in ocean sediments. If it's not buried in one place, it's buried in another. Our evidence suggests it's leaving the Arctic but we think it's unlikely to get very far before being removed."