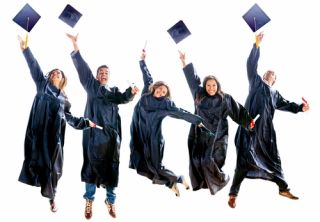 Right around this time every year, new graduates leave their ivory towers for the "real world."

Most graduates have dreams of making their mark, but also hear horror stories of unemployed millennials moving in with Mom or using their master's degree as a barista in a coffee shop. In today's changing economy, is higher education really worth it?

From more money to delayed innovation, here are some of the pros and cons of higher education.

College dropouts founded Facebook, Apple and Microsoft for a reason. In technology, there is frequently a right time for an idea to take off, and waiting four years to complete a college education can mean missing out on those opportunities, said Mike Gibson, the vice president for grants at the Thiel Foundation, which provides $100,000 grants to budding entrepreneurs in order to skip college and pursue their dreams. [Creative Genius: The World's Greatest Minds]

Younger people are also more likely to be free of commitments, so they can pull all-nighters and work longer hours than those raising a family, Gibson said.

College may also be slowing down innovation, at least in the sciences, Gibson said.

In a 2008 working paper, Northwestern University management professor Benjamin Jones found that the age at which scientists patent their first inventions has gone up since the turn of the last century, from 23 to 32. That huge jump is likely because more and more people are stuck in college and graduate school when they would have had their "eureka!" moment in the past. And people haven't simply shifted their productivity to later in life — they are reducing their overall life contribution, the study suggests.

Of course, most people who go to college don't want to make the next Facebook or reinvent the wheel; they want to do something interesting and take home a decent wage in the process. And there's no doubt the surest path toward steady income is to earn a four-year degree, research suggests.

According to the U.S. Census Bureau, in 2009, a high-school graduate earned a median of $30,627 a year, whereas college graduates earned higher income, a median of $56,665. And a 2010 study from Georgetown University's Center on Education and the Workforce found that 60 percent of all jobs in the country required higher education.

Jobs that require just a high-school degree are disappearing, but those requiring post-secondary education are increasing. The Georgetown study predicted that by 2018, 22 million new jobs would be created that require college degrees, but at least 3 million fewer people would earn college diplomas or bachelor degrees. All in all, degree holders will have many more opportunities than those who drop out.

On the negative side, all of that education has a price tag. Going to college often means taking on tens of thousands of dollars of debt.

Sticker shock has some questioning whether higher education can be acquired online at a fraction of the usual price. Massive online course providers such as Coursera and Udacity now offer hundreds of classes that can be taken for free while students lounge at home in sweatpants. Some believe these classes will replace many of the requirements in traditional two-year and four-year colleges. In the Pew study, roughly 60 percent believed that online coursework would change higher education by 2020.

"There was a strong sense that, at a minimum, blended coursework — some combination of offline and online coursework — was going to be the reality for many students," said Lee Rainie, director of the Pew Research Center's Internet & American Life Project, which conducted the survey.

"By and large, people who have gone to college think it was a valuable experience," Rainie said.