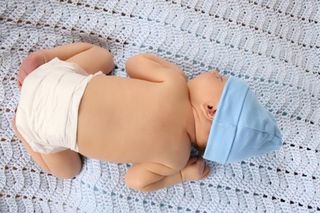 Boys whose testes have not descended into the scrotum at birth may be nearly three times more likely to develop testicular cancer later in life, according to a new study.

However, it has remained unclear exactly how much a boy's risk of testicular cancer is increased if he was born with undescended testes, a question the new study aimed to answer. The researchers reviewed 12 previous studies, conducted between 1980 and 2007, including more than 2 million men.

They found that boys with undescended testes were 2.9 times more likely to develop testicular cancer.

"Our study provides a comprehensive, generalisable estimate of the true risk of a boy with isolated cryptorchidism developing a subsequent testicular malignancy," the researchers wrote in their findings.

Now, researchers must consider whether this degree of increased cancer risk means that boys born with the condition should undergo heightened surveillance for testicular cancer, according to the study.

About 6 percent of newborn boys are born with undescended testes, according to the study. While a fetus remains in utero, the testes form and develop within the abdominal cavity. Normally, they move into the scrotum before birth, but in boys with the condition, the testes remain in the abdomen.

The reason for the link between the condition and cancer is not clear. Studies have suggested that the temperature elevation experienced by the testes while they are in the abdominal cavity somehow promotes cancer. It could also be that an underlying hormonal condition predisposes some boys to both cryptorchidism and testicular cancer.

Future studies should continue to look at the link, and should examine how men's risk of cancer is affected by factors such as whether one or both testicles remained undescended at birth, the degree to which the testicles have descended, and whether the condition was corrected with surgery.

The study is published today (Nov. 28) in the journal Archives of Disease in Childhood.

Pass it on: Boys' undescended testes may be linked to testicular cancer later in life.