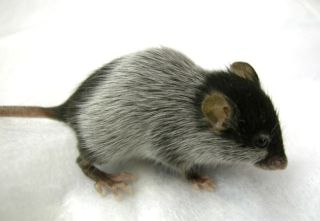 A mouse with that distinguished look.
(Image: © Emi Nishimura and David Fisher)

We've all heard that stress causes gray hairs. Now, new research suggests it’s true. But instead of psychological stress, the study points to stress at the cellular level as the culprit behind our silver strands.

The blame lies on "genotoxic stress," or stress from mutagens that can cause damage to DNA, such as ultraviolet light. The researchers found that this cellular stress diminishes the supply of melanocyte stem cells (MSC) — cells in hair follicles that are responsible for making the pigment-producing cells that give hair its color.

While the researchers saw that genotoxic stress depletes the supply of melanocyte stem cells, they found that it wasn't just because these cells were dying off. It was also because some of the cells were differentiating into mature melanocytes.

Once the stem cells are damaged, "[they] need to be eliminated to maintain the quality of the stem cell pools," said Emi Nishimura of Kanazawa University. "We found that excessive genotoxic stress triggers differentiation of melanocyte stem cells." He says that differentiation might be a more sophisticated way to get rid of those cells than stimulating their death.

The researchers performed their experiments in mice, and used x-ray radition to damage the animal's DNA.

The findings support the "stem cell aging hypothesis," which proposes that DNA damage to long-lived stem cells can be a major cause for the symptoms that come with age.

The results were published in the June 12 issue of the journal Cell.