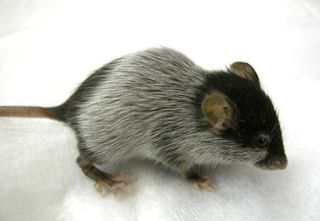 A mouse with that distinguished look.
(Image: © Emi Nishimura and David Fisher)

Gray hair is all a big mistake.

Some stem cells that generate the cells which make pigment -- producing blondes, brunettes and redheads -- die off with age, according to a new study that finally gets at the root of this problem.

If that were it, that distinguished look might not set in so soon. But the cells that continue producing hair-coloring cells start making errors, placing them in the wrong location where they're useless.

Lots of mice got gray hairs in this new study, which is reported today on the web site of the journal Science. The surprising results led to inspection of human scalps, too, revealing a possible cause of premature graying.

Researchers say the discovery won't lead to any reversal of graying in human hair anytime soon. But it could lead to a better understanding of melanoma, a skin cancer that will kill about 7,900 people this year.

Turns out melanoma and gray hair are related, though not directly.

The pigment cells are called melanocytes. When they work right, hair keeps its youthful color. When they die off or develop in the wrong part of the hair follicle, its time to buy some Grecian Formula. And sometimes melanocytes go completely the other way, multiplying out of control to form the tumors of malignant melanoma.

"Preventing the graying of hair is not our goal," said David Fisher of the Dana-Farber Program in Melanoma and Children's Hospital Boston. "Our goal is to prevent or treat melanoma, and to the extent this research is revealing the life cycles of melanocytes, which are the cells that become cancerous in melanoma, we would love to identify a signal that would make a melanoma cell stop growing."

Fisher and his colleagues examined mice as they grew old and turned gray. The rodents lost melanocyte-producing stem cells in proportion to their loss of color, while also developing pigmented melanocytes in the wrong location, rendering them useless. Surprised, the scientists then looked at scalp tissue samples from people of various ages, and found the same pattern.

Cell survival in general is influenced by an "anti-death" gene known as Bcl2. So the study included mice without the gene. Turns out they lose their melanocyte stem cells shortly after birth and turn gray quickly. Could be, Fisher said, that people who gray prematurely have mutations that knock out Bcl2.

And as for cancer research, "now we have a much more refined way of dissecting that signaling pathway in melanoma," he said. "Eventually we hope to tap into this death pathway, thereby using drugs to mimic the aging process, to successfully treat melanoma."