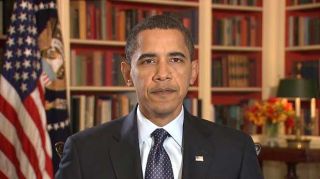 News reports today point out that President Obama is going a little gray at the temples. Is it the stress of the job, or is he due to go gray about now anyway?

We saw it happen to George Bush, and in dramatic fashion with Bill Clinton. Obama saw his own grayer self coming.

"Seniors, listen up. I'm getting gray hair myself," Obama said at a campaign stop in Indiana last spring, according to The Washington Post. "The gray is coming quick," he said a few months later. "By the time I'm sworn in, I will look the part."

Though his presidency is in its infancy, Obama has been under serious stress for 754 days, as the Post points out. That's how long ago he declared his candidacy. Despite rumors, Obama's barber of 17 years said the president has not colored his hair — neither to make it gray or keep it black.

In fact, scientists don't know exactly what brings on that distinguished look.

“Presidents age two years for every year that they’re in office,” said Dr. Michael F. Roizen in The New York Times. Roizen is co-founder of RealAge, a Web site that tells you how much older your body really is based on your habits and other factors. While that may or may not be true, there are some studies that suggest how we go gray.

A study out just last week suggested graying is caused by a massive build up of hydrogen peroxide caused by wear and tear of our hair follicles. The peroxide blocks the normal synthesis of melanin, the pigment that colors hair and skin.

"All of our hair cells make a tiny bit of hydrogen peroxide, but as we get older, this little bit becomes a lot," explained Dr. Gerald Weissmann, editor-in-chief of the FASEB Journal. "We bleach our hair pigment from within, and our hair turns gray and then white. This research, however, is an important first step to get at the root of the problem, so to speak."

A study in 2004 found, however, that some stem cells that generate the cells which make the melanin die off with age.

For sure, stress can kill.

Studies have shown stress can cause deterioration in everything from your gums to your heart. It can make you more susceptible to the common cold and cancer, according to a review of research published in the Dec. 2007 issue of the Association for Psychological Science's magazine Observer.