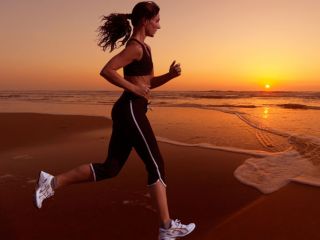 Maintaining a healthy weight and exercising, either moderately or intensely, can lower the risk of breast cancer, a new study found.

Additionally, the study showed that women who were not regular exercisers as young adults benefited by starting to be more physically active during their later reproductive years and after menopause.

The researchers studied more than 3,000 women, half with breast cancer and half without, and found that those who exercised between 10 and 19 hours a week were 30 percent less likely to have breast cancer, compared with those who did no exercise.

Those who exercised during their reproductive years experienced the greatest benefit, with a 33 percent reduction in breast cancer risk, compared with those in the age group who did no exercise during those years.

But those who exercised after menopause experienced a 30 percent reduction in risk, compared with those of the same age who didn't exercise.

“If you’re postmenopausal, and you have not been active, it’s not too late to get started,” said lead researcher Lauren McCullough, of the University of North Carolina’s Gillings School of Global Public Health.

Nearly 100 studies have now linked exercise with a reduced breast cancer risk, with most studies showing the risk reduction to be about 25 percent, said Christine Friedenreich, an epidemiologist at the University of Calgary who has studied the relationship between cancer and exercise. But the new study is "a more refined analysis," and its findings might encourage women to start exercising regardless of their history, Friedenreich said.

Exactly how the link might work isn't understood. But it may have something to do with the decreased weight that tends to come with exercising, McCullough said. Carrying extra weight is associated with higher incidence of cancer, likely because the hormone levels and inflammation tend to be higher in heavier people.

However, she said, the new study showed that exercise has benefits at any age and regardless of weight loss.

“Even if you’re overweight and you’re not seeing the pounds come off, you’ll see a risk reduction,” McCullough said.

In other words, the benefits of exercise were negated by gaining too much weight.

The researchers surveyed women ages 20 to 98, who were part of the Long Island Breast Cancer Study Project, which looked at the relationship between breast cancer and the environment.

The link between exercise and reduced risk of cancer held when the researchers took into account factors that could affect participants' risk of breast cancer, such as prior use of oral contraceptives, smoking, number of pregnancies and family history of breast cancer.

In the study, the researchers looked at the amount of time participants spent doing recreational exercise, but women often get exercise doing their everyday activities — around the house or through their occupation, for example, Friedenreich said. Fitting exercise into these other realms could be an easier way for women to increase their physical activity, she said.

"This is very empowering news for women — this is something they can take control of," Friedenreich said.

The study was published today (June 25) in the journal Cancer.

Pass it on: Maintaining healthy weight and exercising — even starting late in adulthood — can help reduce the risk of breast cancer.