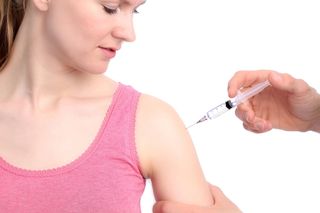 Certain forms of injectable birth control may increase the risk of breast cancer in women in their 20s, 30s and 40s, a new study says.

Women in the study who used progestin-only injectable birth control, which is sold under the brand name Depo-Provera, for a year or more were 2.2 times more likely to have breast cancer compared with women who did not use this form of birth control.

Oral birth control pills have also been linked with an increased breast cancer risk. One analysis of 150,000 women showed that those taking oral contraceptives were 1.24 times more likely to have breast cancer as women not using birth control. That increased risk also dropped once women stopped taking the pills.

The new U.S. study adds to a growing body of research from other countries that has found an elevated breast cancer risk among recent users of this type injectable birth control, which is based on the compound depot-medroxyprogesterone acetate, or DMPA.

Although breast cancer younger women remains rare, "our findings emphasize the importance of identifying the potential risks associated with specific forms of contraceptives, given the number of available alternatives," the researchers said.

While DMPA contains the same kind of progestin as the hormone-therapy regimen found by a Women's Health Initiative trial to increase breast cancer risk among postmenopausal women, few studies have evaluated the link between DMPA use and breast cancer risk in younger women.

In the study, Dr. Christopher Li, of Fred Hutchinson Cancer Research Center in Seattle, and colleagues analyzed information from 1,028 Seattle-area women ages 20 to 44 who had been diagnosed with breast cancer, and 919 women of similar age who did not have breast cancer as controls. Women were interviewed about their DMPA use.

Overall, use of DMPA was not common, with 11 percent of breast cancer patients and 10 percent of controls having ever used this form of birth control.

About 3.1 percent of women diagnosed with breast cancer had used DMPA for 12 months or more within the last five years, compared with1.6 percent of controls.

"In the United States, many women have numerous options for contraception, and so it is important to balance their risks and benefits when making contraceptive choices," Li said.

The study will be published in the April 15 issue of the journal Cancer Research.

Pass it on:  Using progestin-only injectable birth control for a year or more may increase the risk of breast cancer in women under 40.