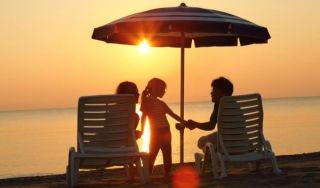 Exposure to ultraviolet radiation may lower the risk of developing pancreatic cancer, according to a new study from Australia.

Researchers looked at 1,400 people and found that those born in areas with the highest levels of ultraviolet (UV) radiation were 34 percent less likely to have pancreatic cancer, compared with those born in areas with the lowest UV levels. The link held after researchers accounted for factors that could affect participants' pancreatic cancer risk, such as age, smoking and diabetes.

But exposure to UV radiation has long been linked with an increased risk of skin cancer, including the deadliest type, melanoma.

"We need to avoid the sun during the daytime periods when UV levels are the highest, and protect parts of the body that regularly get the highest exposure," said study leader Rachel Neale, a researcher at the Queensland Institute of Medical Research in Queensland. "We don't have the science yet," to recommend a level of ultraviolet exposure that might optimize the balance between the increased risk of skin cancer with the lowered risk of pancreatic cancer, she said.

Researchers aren't sure exactly how the link may work, but Neale noted that there also is evidence that UV exposure may lower the risk of colorectal and other internal cancers.

Pancreatic cancer is a deadly disease — an estimated 44,000 people in the U.S. will be diagnosed with the condition in 2012, and 37,000 are expected to die of the disease this year.

Neale and her colleagues interviewed 704 people with pancreatic cancer and 713 people without the disease. The researchers asked where the participants were born, where they lived since their birth, their skin type and whether they easily developed sunburns, their intake of vitamin D over the course of their lives, and whether they'd been diagnosed or treated for skin cancer or skin lesions.

In this study, participants' birthplaces were matched to NASA data of UV radiation levels, which is one way that researchers assess people's UV exposure. However, Neale said, future analyses of the data — including a look at people's places of residence over the course of their lives — will give a more complete picture of the link between UV exposure and pancreatic cancer risk.

"We found that in all of our measures, sun exposure was predictive of pancreatic cancer," Neale said.

The data showed that people who said they burn readily after sun exposure were half as likely to have pancreatic cancer as those who don't burn at all.

Additionally, people who'd been treated for skin cancer or other sun-related skin lesions had a 40 percent lower risk of pancreatic cancer than those who had not had skin lesions treated.

The strongest association with a reduced pancreatic cancer risk was seen in people who reported that their skin lesions were treated by being burnt off the skin, Neale said. The lesions that are typically treated this way are those that most strongly linked with sun exposure, such as solid keratoses and actinic keratoses.

Researchers aren't sure why there may be a link between UV exposure and a lowered risk of pancreatic cancer, Neale said.

Some studies have linked lower rates of cancer in general with higher vitamin D levels, and vitamin D is produced by sun-exposed skin.

However, studies of pancreatic cancer looking at vitamin D levels and cancer risk are mixed, Neale said, and one study published this year in the International Journal of Cancer found that people with either very low or very high levels of vitamin D had a higher risk of pancreatic cancer.

Clinical trials are needed to better understand the link, she said.

There are also other possible mechanisms that could explain the link, Neale said. While UV radiation generally has a suppressive effect on the immune system, "the immune system is complicated, and it's possible the link has something to do with immune function," she said. Genetics partly governs people's reactions to sunlight, and may also play a role, she said.

Pass it on: Ultraviolet exposure may lower the risk of pancreatic cancer.

Editors note: This story was updated at 7:30 p.m. ET on Tuesday, to reflect updated data available from the researchers. (The original story stated that the risk of pancreatic cancer was reduced by 24 percent, among those with the highest UV exposure levels.)