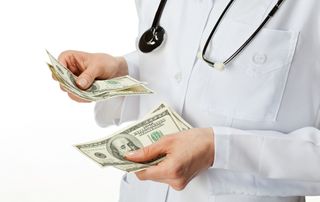 Imagine if your doctor promised to take $10 off your co-pay if you finally met your weight-loss goal. Some people may jump at the chance, but some may not.

For years, experts have debated whether patient incentive programs are an effective way to motivate people to improve their health.

In a recent editorial published in the Annals of Family Medicine, Dr. Joanne Wu, a primary care physician  in Portland, Ore., proposed tackling the problem by offering patients rewards in the form of discounts, such as reduced costs for co-payments for doctor visits, medications or medical procedures.

"I realized that the money health insurance groups pay physicians to reach certain health measures might be more efficient if given to patients, so they can achieve certain health goals," Wu said. "I think it's important for the patient to take an active role in trying to improve their health."

Rewarding doctors for quality care may not help patients

Some insurance companies and Medicare programs pay doctors for achieving specific health goals with their patients. But past research suggests that such programs might not be effective.

In one study, British researchers looked at nearly 500,000 people in a program where doctors were rewarded if their patients improved their high blood pressure over a seven-year period. They found that the program did not result in reduced blood pressure levels.

Instead, the researchers found, the doctors' quality of care for these patients was stable over the course of the study, or was already improving before the incentive program began. The researchers noted that although the financial incentives in the policy were considerable, it is possible that the goals for hypertension were set too low, and therefore doctors did not need to change their behavior significantly to attain them.

"The aim for rewarding doctors for high-quality care is the hope that they might put more effort in getting their patients to engage in healthy behavior," said Dr. Jason Doctor, a health economist at the University of Southern California School of Pharmacy. "But it's shown only limited effectiveness."

Rather than giving people money, Wu proposed rewarding them with discounts that could ultimately reduce medical costs, as well as issues such as people not completing their medication regimens.

"A good start would be controlling blood pressure and blood sugar levels," she said. "It's easy to measure, and there's evidence showing benefits to keeping these levels in check."

Rewarding people with money for healthy behaviors could be effective for the short-term, but not necessarily the long-term, Wu said.

"It's more acceptable to people if they get it in the form of discounts, which could lead to long-term changes in behavior, since it's an ongoing reward system," she said.

Although Doctor said Wu's idea is an interesting plan, he believes it would work best for patients with chronic illnesses.

"People aren't really seeing the doctor," unless they are already sick, he said. "So I'm not sure these incentives would be as important as for those who have chronic diseases like diabetes, who need to get their blood sugar checked more regularly."

Still, Doctor said that rewarding people with discounts could work.

"Short-term programs — like getting people to lose weight — have been successful," he said.

Other financial incentive programs that seem promising include having people put up their own money up front. If they lose weight, they get the money back, along with a bonus, Doctor said.

"We can actually save more money if we reward people a small amount of money to stay healthy, so we don't have to pay large amounts to treat them later," he said.

Pass it on: Rewarding people for being healthy could have long-term benefits.