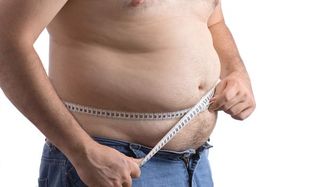 The mechanisms behind these different effects on men's risk, however, are unclear, study authors said.

In any case, losing weight is generally a good idea for obese men.

"If you're obese and lose weight, you're not guaranteed to ward off cancer," said Dr. Stacy Loeb, a urologist who specializes in prostate cancer at the New York University Langone Medical Center.

"But it may contribute in decreasing your risk of [aggressive prostate cancer] and other diseases," said Loeb, who was not involved with the study.

The study was published Jan. 6 in the journal Annals of Oncology.

Obesity is a risk factor for major chronic diseases

Prostate cancer is the most common type of cancer in men. About 1 in 6 men will be diagnosed with prostate cancer during his lifetime, according to the American Cancer Society.

Previous evidence has suggested there may be a link between obesity and prostate cancer.

Along with increasing the risk of advanced prostate cancer, obesity is a risk factor for major chronic diseases such as diabetes, high blood pressure, cardiovascular diseases and other kinds of cancer.

"There's not much men can do if they have a genetic risk, but if there are lifestyle factors that they can change, like weight loss, this may help reduce their risk," she said.

From medical literature databases, researchers identified 25 studies on localized and advanced prostate cancer conducted between 1997 and 2011. They looked at the body mass index (BMI) to observe the relationship between obesity and the risk of prostate cancer. BMI is a measure of body fatness.

Results showed that for every 5-point increase in body mass index, a man's risk of developing localized prostate cancer decreased by 6 percent.

However, the risk of developing advanced prostate cancer rose by 9 percent.

"The risk was modest," Loeb said. “So, men shouldn't freak out."

She also pointed out that other risk factors are much more strongly linked with prostate cancer risk than obesity. “Obesity doesn't mean you're definitely going to get prostate cancer, and there’s no guarantee that you’re safe if you’re not obese,” Loeb said.

Still, she said, "Losing weight reduces the risk of all other health problems, so if it's helpful in reducing the risk of prostate cancer, it would fit in with the overall health message of leading a healthy lifestyle."

Pass it on: Obesity seems to have a dual effect on prostate cancer.