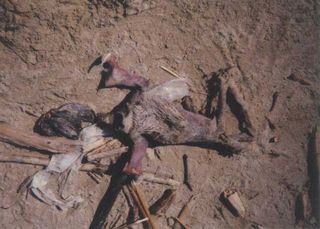 On a jungle beach near the border between Panama and Costa Rica in 1996, Benjamin Radford found this strange animal that had obviously washed up. It was headless and mostly hairless except for a patch on its chest; it had four limbs, what seemed to be a stubby tail, and large claws at the end of each arm. The legs were spindly compared to the arms. Monster? A close inspection of the bizarre creature's paws revealed a clue. The three white claws were long and distinctive. Radford realized the monster had once been a regular sloth, turned into a monster by decay and predation.
(Image: © Benjamin Radford)

The so-called "Montauk Monster" was a strange creature that supposedly washed ashore on a beach in Montauk, New York, in July 2008.

A photo of the odd animal circulated around the Web and became the subject of national media interest. Some say it is a hoax; others believe that the photo depicts a known animal. Some believe it looks like a pig, while others vaguely and cryptically suggest that the animal is somehow a result of "biological warfare."

This week, reports of another Montauk Monster are circulating the web.

In both cases, real animals are viable possibilities. In previous columns I have discussed how animal diseases such as sarcoptic mange can create apparent monsters, for example transforming sick dogs or coyotes into the dreaded (and likely mythical) blood-sucking chupacabra. The same process occurs with decaying animals that have been misshapen by bloating, predation, and decay.

In April 1977, a Japanese fishing vessel was trawling off the coast of New Zealand when it pulled up a large, mysterious animal carcass. According to fishermen on the boat, it weighed about 4,000 pounds and no one could positively identify the massive, stinking corpse. It seemed to have flippers and a long neck and tail. All the organs were gone, but some of the flesh and fat were intact. Several photos of the strange catch were taken and have appeared in books on mysterious creatures as evidence that perhaps the boat had caught a sea monster or a recently-living dinosaur. Eventually the creature was identified as the corpse of a basking shark.

Many monster enthusiasts believe that huge, unidentified masses that occasionally wash up on beaches throughout the world are sea monsters. These finds, often called globsters, are obviously flesh, yet have decayed so badly that they lack bones or distinguishing features. One classic globster washed ashore in 1896, when giant waves tossed a massive fleshy corpse on a beach at St. Augustine, Florida. The rubbery, six-foot-high blob was examined by a local naturalist, who initially speculated that it was likely from a giant octopus far larger than any previously seen. Many other such blobs have washed ashore, including one in Chile in July 2003 and another in Newfoundland in 2001. In 2004, scientists examined all available globster specimens using electron microscopes, and applied biochemical, molecular, and DNA analysis. The conclusion: the globsters were simply decayed whales.

In 1996, I found and photographed my own version of the Montauk Monster on a jungle beach near the border between Panama and Costa Rica. It was a strange animal that had obviously washed up from the ocean and was baking in the tropical sun. It was headless and mostly hairless except for a patch on its chest; it had four limbs, what seemed to be a stubby tail, and large claws at the end of each arm. The legs were spindly compared to the arms, and it was like nothing I or my companions had ever seen before. (See photo.) A close inspection of the bizarre creature's paws revealed a clue to the "monster's" identity. The three white claws were long and distinctive. I realized that the monster had once been a normal, recognizable animal of the Bradypodidae family, but decay and predation had turned a sloth into a monster.

So what is the Montauk monster?

The scientific consensus is ... a raccoon. Darren Naish, a British paleontologist, examined photos of the animal and concludes it is a raccoon:

"The Montauk monster... owes its bizarre appearance to partial decomposition," Naish said. "The tendency for the soft tissues of the snout to be lost early on in decomposition immediately indicates that the 'beak' is just a defleshed snout region: we're actually seeing the naked premaxillary bones. The match for a raccoon is perfect once we compare the dentition and proportions. The Montauk animal has lost its upper canines and incisors (you can even see the empty sockets), and raccoons are actually surprisingly leggy (claims that the limb proportions of the Montauk carcass are unlike those of raccoons are not correct)."

The supposed monster this year may well be a raccoon, too, or some other normal creature. It is not surprising that people could not identify what they saw, as science shows that ordinary decay can create extraordinary monsters.