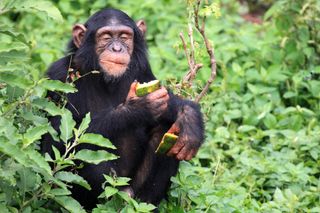 Chimpanzees may help us understand why our human ancestors started eating certain plants for medicinal purposes, a new study says.

The study revealed chimps eat about twice as many "unusual" foods as gorillas do. Researchers refer to foods that are not a typical part of an animal's diet but are eaten on occasion as unusual, and believe such foods are eaten for reasons other than nutrition; some of these foods contain druglike compounds. Among all primates, chimps are our closest relatives, with gorillas being more distantly related.

Further, the study showed which social and physiological traits may have allowed the common ancestor of humans and chimps to start using plants as medications. These traits include a high reliance on members of the same species, which promotes learning within a community, and extra sensitivity to certain compounds, which might make an animal more discerning about foods eaten for nutrition and those eaten for healing.

Both of these characteristics were observed among chimps in the study.

"We could think that our first medication evolved in the human linage in the same way that we observe [its use] today in chimpanzees," said study researcher Shelly Masi, of the National Museum of Natural History in Paris.

Previous research had suggested chimps sometimes eat foods with low nutritional value that contain druglike compounds, but why and how they learn to do this is unknown.

Masi and colleagues observed a community of 40 or so chimpanzees in Uganda for 11 months, and for comparison, a community of about a dozen wild western gorillas in the Central African Republic for 10 months.

The chimps also seemed to learn more by watching their fellow community members than gorillas did. Chimps typically watched other chimps consume food only when they were eating unusual foods, and not typical foods. This was not the case for gorillas, and may mean the chimps were learning about which foods may have medicinal effects, according to the study.

Chimps were also more likely to learn from the fittest adults, and continue to learn throughout their lifetime. In gorillas, learning by observation took place mostly in childhood and occurred between gorillas that were about the same age.

The fact that chimps rely more on social information than gorillas and that chimps tend to keep learning about unusal foods from each other during adulthood, may have allowed them to make a better association between medicinal plants and particular health conditions, Masi said.

The guts of chimps, like those of humans, are less able to detoxify harmful substances, the researchers said. As a result, chimps are more cautious about the unusual foods they consume.

This cautiousness may have existed in an ancient ancestor of humans and chimps, and led it to eat unusual foods "specifically in association with certain stimuli (e.g. malaise and diseases) creating the subtle differences between food and medicine which become more precise in modern humans," the researchers wrote in the January issue of the journal Physiology & Behavior.

Masi's colleague Sabrina Krief is investigating whether chimps eat specific medicinal plants when they have a specific disease, Masi said. For example, a chimp suffering from intestinal upset caused by parasites might eat a type of bark that has antiparasitic properties, Masi said.

The currrent study was funded by ANR JC SAFAPE , which is a grant for young researchers from the French Governmental Agency of Research, the National Museum of Natural History of France and Cleveland Metroparks Zoo.

Pass it on: Certain characteristics shared by humans and chimps may have allowed them to incorporate medicines into their societies.