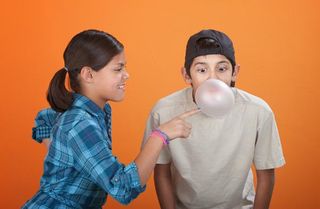 Children who chewed gum containing xylitol were 25 percent less likely to develop ear infections compared with kids who chewed a placebo gum, according to the review of previous studies.

Kids in the study had to chew xylitol-containing gum quite often to see a benefit two pieces of gum, five times a day after meals, for two to three months.

The previous studies examined the effect of xylitol on acute otitis media, the most common type of ear infection.

Acute otitis media is also the most common infection for which kids are prescribed antibiotics in the United States, so chewing gum has the potential to reduce antibiotic use in children , said study researcher Dr. Amir Azarpazhooh, an assistant professor of dentistry at the University of Toronto..

Xylitol is known to inhibit the growth of bacteria, and has been recommended by dentists as a way to prevent cavities.

However, the authors of the new research don't go as far as to advocate xylitol gum for preventing ear infections. More trials are needed to examine the link.

And even if gum-chewing was recommended to prevent ear infections , there are obstacles to its implementation. For instance, some schools might not allow kids to chew gum, and the activity comes with the risk of choking. (Children under 4 years of age should not chew gum at all because of the choking hazard, Azarpazhooh said.)

Azarpazhooh and colleagues reviewed four studies from researchers in Finland that included about 3,100 kids who attended day care . The children were 12 years old or younger, and were randomly assigned to receive xylitol (in the form of gum, a syrup or a lozenge) or a placebo.

Three of the four studies showed a reduced risk of ear infections in kids who consumed xylitol. The fourth study looked at kids' risk of respiratory infections , and found no link.

Xylitol gum was more effective than the syrup at preventing ear infections, but there was no difference between the gum and lozenges.

Consumption of xylitol also reduced use of antibiotics. Children who took xylitol in the studies were prescribed 10 percent fewer antibiotics compared with those who took placebos.

While the findings are promising, all of the studies were done in the same country. The results should be confirmed by other researchers in other parts of the world before a recommendation can be made, Azarpazhooh said.

The bacteria Streptococcus pneumonia and Haemophilus in?uenzae are the most common causes of acute otitis media. These bacteria colonize the upper airway (behind the nasal passages) and make their way to the middle ear.

Unlike sugar, xylitol cannot be used as a source of energy by many of the bacteria that cause cavities and ear infections, Azarpazhooh said. It's thought that xylitol reduces the ability of these bacteria to stick to the airway passages and grow.

The researchers recommended children chew gum for no more than 5 to 10 minutes. Excessive gum chewing may lead to complications, including injury to the teeth and jaw, and may discourage kids from eating.

The study is published in the November issue of the journal The Cochrane Library.

Pass it on: Chewing gum containing xylitol may reduce the risk of ear infections.