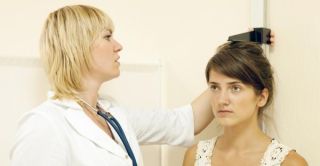 Taller women are at an increased risk of developing a wide range of cancers, a new study suggests.

The results show that for every 4 inches (10cm) of height, a woman's risk of developing cancer rose by about 16 percent.

Previous research has shown a link between height and cancer risk, but the new study extends the findings to more cancers, and for women with differing lifestyles and economic backgrounds, the researchers said.

The results suggest that increases in the height of populations over the course of the 20th century might explain some of the changes in cancer incidence over time, the researchers said.

Researchers led by Dr. Jane Green, a cancer epidemiologist at the University of Oxford in England, collected data on height and cancer incidence on 1.3 million middle-aged women participating in the ongoing Million Women Study in the U.K. Participants were followed for an average of 10 years.

The researchers identified 97,000 cases of cancer.

The risk of developing any type of cancer increased with increasing height, as did the risk of many specific types of cancer, including cancers of the breast, ovary and uterus, and malignant melanoma.

The authors also conducted a meta-analysis, combining their results with those from ten previous studies.

"We showed that the link between greater height and increased total cancer risk is similar across many different populations from Asia, Australasia, Europe, and North America," the study said. "The link between height and cancer risk seems to be common to many different types of cancer and in different people; suggesting that there may be a basic common mechanism, perhaps acting early in peoples' lives, when they are growing."

Height is determined by environmental influences including diet and infections in childhood, as well as growth hormone levels and genetic factors, the researchers said.

"The importance of our findings is that they may help us to understand how cancers develop," the researchers said.

Future work in this area should attempt to tease out the key factors that influence the development of cancers that seem to be height-related, wrote Andrew Renehan, from the University of Manchester in England, in an editorial accompanying the study.

"In the future, researchers need to explore the predictive capacities of direct measures of nutrition, psychosocial stress, and illness during childhood, rather than final adult height," Renehan wrote.

The study was published online Wednesday (July 20) in the journal The Lancet Oncology.

Pass it on: How tall you are may affect your cancer risk.