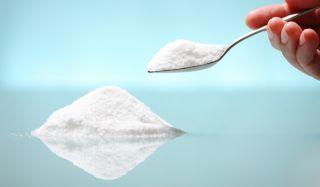 Cutting back on salt may lower your blood pressure, but it might not help you live any longer, a new study finds.

A moderate reduction in salt intake did not reduce participants' risk of dying or having heart disease, the researchers said.

And eating less salt even increased the risk of death in patients with congestive heart failure, a condition in which the heart can't pump enough blood for the body.

Still, reducing salt intake did have benefits. Those who ate less salt saw a small reduction in blood pressure after six months, said study researcher Rod Taylor, of the University of Exeter in the United Kingdom. And it could be that participants simply didn't cut back enough to see the benefits translate to an increased lifespan.

"We believe that we didn't see big benefits in this study because the people in the trials we analyzed only reduced their salt intake by a moderate amount, so the effect on blood pressure and heart disease was not large," Taylor said. Health professionals need to find practical, inexpensive ways of getting patients to reduce salt intake.

The U.S. government currently recommends Americans limit their salt intake to 2,300 milligrams per day . A high-salt diet has been linked with an increased risk of heart disease and stroke.

Taylor and colleagues reviewed seven studies in which 6,500 total participants reduced their salt intake for at least six months. However, Taylor said, close to 18,000 people would need to be studied before researchers could statistically determine more clear health benefits.

In May, a study published in the Journal of the American Medical Association also questioned the benefits of lowering salt intake. That study found people who ate the most salt were less likely to die of heart disease than those who ate the least.

More studies are needed to make firm conclusions about the benefits and harms of cutting back salt.

"With governments setting ever-lower targets for salt intake, and food manufacturers working to remove it from their products, it's really important that we do some large research trials to get a full understanding of the benefits and risks of reducing salt intake," Taylor said.

The American Heart Association said the new findings need to be put in perspective. For example, the new findings may not apply to people in the United States because some of the studies in the review were conducted exclusively in Taiwan, Australia and Italy. In addition, although some participants were followed for as long as six years, this still may not be long enough for high blood pressure, heart disease and stroke to develop.

The AHA strongly recommends people with and without high blood pressure limit their daily sodium to no more than 1500 mg. This recommendation is based on expert consensus and published research, the AHA said.

The study was published in the July issue of The Cochrane Library.

Pass it on: Cutting back on salt lowers blood pressure, but more evidence is needed to see whether it increases lifespan or reduces the risk of heart disease.