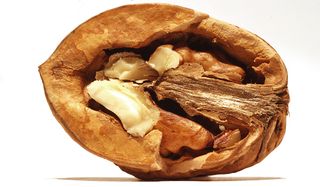 To fight free radicals that can damage our body's cells and cause disease, walnuts are the top nut to eat, according to new research.

That's because these nuts pack large loads of antioxidant polyphenols, compounds that interact with free radicals to stabilize them and prevent them from doing damage to cells. Harmful free radicals are charged particles that are produced from reactions in our body, as well as by pollution and cigarette smoke. When they collide with cells, they can start a chain chemical reaction that disrupts the workings of the cell, which can damage or kill cells.

"A handful of walnuts contains almost twice as much antioxidants as an equivalent amount of any other commonly consumed nut. But unfortunately, people don't eat a lot of them," Joe Vinson, a chemistry professor at the University of Scranton, said in a statement. "This study suggests that consumers should eat more walnuts as part of a healthy diet."

Vinson found that the potency of antioxidants present in walnuts was higher than any other nut he examined in the study.

Antioxidants in walnuts were four to 15 times as potent as they are in vitamin E, which is known for its antioxidant effects, he said.

Vinson's study also revealed that nuts make up about 8 percent of antioxidants in the average U.S. diet. However, about seven walnuts a day is all it takes to reap their health benefits, Vinson said.

Researchers presented the findings this week at the national meeting of the American Chemical Society. The study was funded by the University of Scranton.

Pass it on: Walnuts have almost twice as many antioxidants as any other commonly consumed nut, including peanuts, pistachios, cashews and pecans.