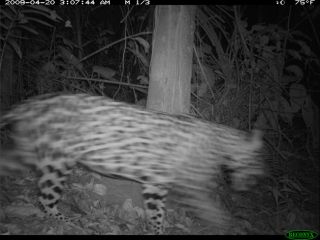 A jaguar has been photographed on a research island in a man-made lake that links up the locks of the Panama Canal, surprising biologists there.

In fact, the image is the first picture taken of this large, carnivorous cat in the field station's 86-year history, the scientists said.

As part of an annual census for mammals on the island, Jackie Willis, a zoologist at Montclair State University, and her husband Greg set up cameras to take pictures of local animals. At 3:07 a.m. on April 20, a jaguar triggered the camera's infrared sensor and snapped a self-portrait. The researchers were excited because jaguar sightings in the region are extremely rare, even on nearby mainland Panama.

Barro Colorado Island and its research station, part of the Smithsonian Tropical Research Institute, is only 200 yards from the mainland, and researchers think that the jaguar swam across part of the Panama Canal to the island's shore. Jaguars, which can sometimes weigh more than 300 pounds, are the largest cats in the Americas, and the island is too small to fully support even one of these felines, said William Laurence, a scientist at the Institute.

The Willis' started using cameras equipped with sensors back in 1994 as a way to record data on elusive and nocturnal island species. The technique helped the scientists gather information about some species that were not well represented in previous censuses.

The recent jaguar photo shows that these cats are still prowling through the Panama area despite facing many obstacles, the researchers said. Jaguars have experienced habitat loss from agriculture and city spread, and they are often shot if they show up in cattle ranching areas.

The scientists hope to capture one more picture of the jaguar before it ventures away from the island.