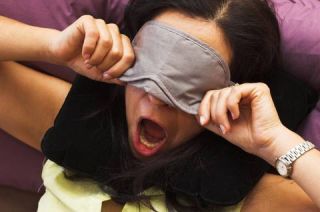 The droopy-eyed jet lag that comes after a cross-country plane trip could be caused by two groups of cells at the base of the brain falling out of synch, a new study suggests.

The body has a built-in time-keeping system, known as a circadian rhythm, that helps us keep track of when it's time to eat, sleep, wake up and perform other body functions. This system is partly governed by the cycle of day and night.

Changing time zones or working the late shift can throw off the body's sense of timing because it changes the timing of our exposure to light.

Researchers at the University of Washington in Seattle found that in rats, the disruption occurs in two groups of neurons, or brain cells. The groups are separate but linked in a structure called the suprachiasmatic nucleus, below the hypothalamus at the base of the brain.

One group — the ventral, or bottom, neurons — receives light information directly from the eyes and governs rhythms in tune with periods of light and dark. These neurons are synchronized with the deep sleep associated with physical fatigue because that part of sleep is most closely tied to light-dark cycles.

The other group — the dorsal, or top, neurons — is insensitive to changes in light and is more closely tied to REM sleep, or the dream state of rapid eye movement.

Usually, these two groups of neurons work together. But when the light-dark cycle shifts, it can throw them out of synch.

Rats are thought to be a good analogue for how human circadian rhythm work.

The researchers exposed rats to a 22-hour light-dark cycle that contrasted with their normal internal cycle. While their deep sleep, largely governed by their response to light and fatigue, quickly adapted to the 22-hour cycle, their REM sleep stubbornly kept to the normal routine.

As a result, their REM sleep didn't come in the usual progression following deep sleep.

"We found that after exposing rats to a shift in the light-dark timing that simulates a trip from Paris to New York, REM sleep needed 6 to 8 days to catch up with non-REM, or deep, sleep, the sleep you usually experience in the first part of the night," said study co-author Horacio de la Iglesia.

The research, detailed online April 16 in the journal Current Biology, could have impacts on other brain processes.

"It could also explain why jet lag is associated with lower learning performance," de la Iglesia said. "We think the disruption of the normal circadian sequence of sleep states is very detrimental to learning."

De la Iglesia thinks that the new work could be useful in fine-tuning solutions to dealing with jet lag. Previous research has indicated that physical activity and fasting can help the body resynchronize faster.