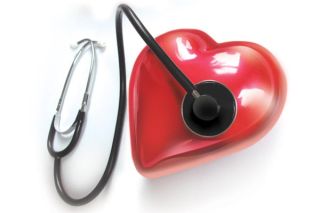 Children who are obese have blood vessels as stiff as those seen in adults who have heart disease, according to new research.

In adults, a stiffening of the aorta — the body's largest artery — is a strong predictor of heart attack, stroke and death, said study researcher Dr. Kevin Harris, a pediatrician at B.C. Children's Hospital in British Columbia, Canada. A stiff aorta generally comes with aging in adults.

But the new study showed stiff aortas in obese children make it seem as if their aging process has been accelerated, he said.

"The stiffening we saw in the obese children is concerning because it's not normal," Harris told MyHealthNewsDaily.

In the past 30 years, childhood obesity has tripled in the United States, from 6.5 percent to 19.6 percent among 6- to 11-year-olds, according to the Centers for Disease Control and Prevention. In 12- to 19-year-olds, it's increased from 5 percent to 18.1 percent.

The new research was presented today (Oct. 25) to the Canadian Cardiovascular Congress.

Comparisons with other kids

Harris and other researchers looked for physical evidence of heart disease risk in obese children. They compared the blood pressure, cholesterol levels and body mass indices (BMIs) of 63 obese children and 55 children of normal weight, whose average age was 13. To measure aortic stiffness, the children underwent ultrasounds of their hearts and blood vessels, which measured how fast blood flowed through the aorta.

Cholesterol levels in both groups of children were normal, but blood pressure was slightly higher in the obese children. And the heart ultrasound showed the obese children's aortas were, on average, stiffer than those of the children of normal weight, Harris said.

Aortic stiffening usually leads to high blood pressure, because the heart has to work harder to pump blood.

"I think that slight elevation in blood pressure, and the findings on ultrasound, or echocardiography, are an early sign of arterial disease," which is one of the earliest signs of heart disease, Harris said.

A wealth of problems

The findings add to the evidence showing overweight and obese children are at high risk of a range of health problems. Their weight condition can easily lead to Type 2 diabetes, high blood pressure, sleep apnea and other problems, according to a 2005 study in the journal Circulation.

And for children who are overweight, gaining a few extra pounds comes with sharper increases in blood pressure than kids of normal weight, according to a study presented this month at the American Heart Association's High Blood Pressure Research Scientific Sessions conference.

And a study published in September in the International Journal of Obesity found the bigger a child's waistline , the higher his chance of developing heart disease or metabolic syndrome.

Because the new study did not follow the obese and normal-weight children through time, Harris said exact results of childhood aortic stiffness can't be determined.

Next, researchers need to find out whether the aortic stiffening in children is reversible with diet and exercise interventions, Harris said.