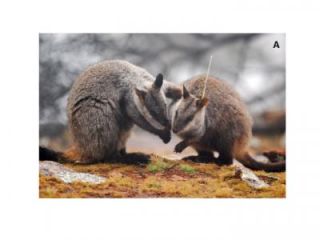 Wallabies in captivity carry antibiotic-resistant gut bacteria, which they could potentially transmit to wild populations, a new study finds.

Brush-tail rock wallabies (Petrogale penicillata) are endangered, so in order to restore populations of these marsupials, conservationists are breeding them in captivity and releasing them into the wild.

The new study found that fecal samples from captive wallabies contained bacterial genes encoding resistance to the antibiotics streptomycin, spectinomycin and trimethoprim. None of these resistance genes were found in the five wild populations the researchers sampled.

"We found that antibiotic resistance genes from human pathogens have been picked up by endangered rock wallabies in a breeding program, and may spread into the wild when the wallabies are released," study author Michelle Power of Macquarie University in Australia said in a statement.

The scientists don't know how the captive wallabies acquired the genes for antibiotic resistance, but exposure to humans likely played a role. The wallabies may have been exposed to resistant bacteria from humans or other animals in their water or feed via contaminated groundwater or runoff.

The researchers analyzed the gut bacteria of wallabies for genetic markers of antibiotic resistance called integrons. They detected these markers in 48 percent of captive wallabies, but not in any of the wild wallabies.

The development of antibiotic resistance in captive animal populations shows the ease with which pathogens can be passed among wildlife, which could promote the spread of disease, the researchers say.

The findings were detailed Wednesday (May 22) in the journal PLOS ONE.

Brush-tailed wallabies live on steep rocky outcroppings in the Great Dividing Range in South Eastern Australia. Their numbers have dwindled and their habitation range has shrunk since the arrival of European settlers, prompting the establishment of captive breeding programs.