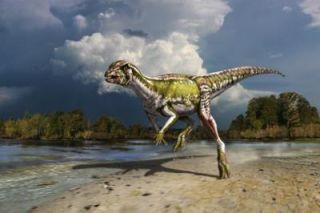 This is an artist's reconstruction of the dinosaur Albertadromeus syntarsus.
(Image: © Julius T. Csotonyi)

Standing next to a human adult, the newly named Albertadromeus syntarsus would have barely reached above the knees and it likely weighed just 30 lbs (16 kg). Its name means "Alberta runner with fused foot bones" because researchers think its two fused lower leg bones would have made it a sprinter, equipped to flee from its predatory neighbors.

The dinosaur's skeletal remains were pulled from the Belly River Group in Alberta, a geological formation that dates back to the Late Cretaceous, about 77 million years ago. The discoverers say Albertadromeus could be the smallest plant-eating dinosaur ever found in Canada.

North America was home to the T. rex, Triceratops and other famous big-bodied dinosaurs, but their smaller counterparts left behind an elusive fossil record. Scientists think that little dinosaurs were prevalent, but their fragile bones were often destroyed before being fossilized, either chewed up by predators or ravaged by weathering.

"We know from our previous research that there are preservational biases against the bones of these small dinosaurs," study researcher Caleb Brown of the University of Toronto, said in a statement. "We are now starting to uncover this hidden diversity, and although skeletons of these small ornithopods are both rare and fragmentary, our study shows that these dinosaurs were more abundant in their ecosystems than previously thought."

The small dinosaurs may be comparable to today's rabbits — "major, but relatively inconspicuous, members of their ecological community," said another researcher from the new study, Anthony Russell, of the University of Calgary.

Findings detailed last month in the Bulletin of the Peabody Museum of Natural History claimed that tiny vegetarian birdlike dinosaurs known as caenagnathids may have been the Darwin's finches of the Late Cretaceous era. At least five species of these flightless feathered dinosaurs once inhabited western North America — some of them living side-by-side. Wide variation in their beak shapes and body size indicates that they may have carved out a diversity of dietary niches, that study found.

The new research was detailed in the Journal of Vertebrate Paleontology.